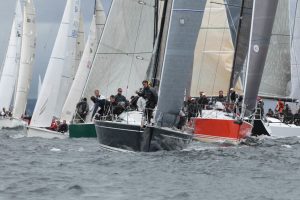 With less than five weeks to the start of Volvo Cork Week, the Royal Cork Yacht Club is ramping up preparations for their bi-annual regatta, which has been run by the world’s oldest yacht club since 1978. Club officials and an army of volunteers are readying the event village in Crosshaven. An estimated two thousand sailors, friends and family, from all over the world, will be visiting the regatta during the week-long event this July.
“It’s the showcase event for the club and it only happens every other year.” Enthused Gavin Deane, General Manager of the Royal Cork Yacht Club. “The regatta organising team are highly motivated to lay on a professional event both on and off the water, which will be well-organised, exciting and above all – fun. We are determined to stage a regatta that the club will be proud of, a memorable occasion for everyone involved.”
Volvo Cork Week Race Chairman, Anthony O’Leary reports on the race courses for 2014.
“Broadly speaking, we will have the same style of courses as 2012; Harbour, Slalom, Olympic and Windward Leeward. The major change will be an overall prize for the Harbour Course, which all teams will race on the first day of Volvo Cork Week.

The result of the Harbour Race will count towards the overall standing for the regatta but in addition the Hugh Coveney Trophy will be awarded to the ‘Champion of Cork Harbour’ – the overall winner on corrected time of the Volvo Cork Week 2014 Harbour Race. Previously this trophy was awarded for the best performance by an Irish Yacht in the regatta, but the organising committee felt a more inclusive award would have greater appeal, and thereby give appropriate recognition to the best performance in what has become the favourite race for many of our competitors.”
New and Non-Spinnaker Classes
This year at Volvo Cork Week, the number of yachts racing in the popular Non-Spinnaker Class will be complimented by the all-new coastal and two-handed fleets, which are proving to be very popular at all major regattas across Europe. The race organisers have tasked Course Race Officer, Peter Crowley, with the responsibility of specifically designing courses to suit the needs of the non-spinnaker and coastal fleets. It promises to be a great improvement on years of old when non-spinnaker was confined to sailing courses designed for boats with spinnakers.
The coastal courses will allow boats that would normally be out classed or out crewed by some of the more modern and high performance boats, to race against like-minded sailors. This will provide a more relaxed environment, without taking away from the quality of the racing and lay a great foundation for some two handed sailing in the all-new two-handed class.
This year, along with the huge drop in the entry fee, Volvo Cork Week will also be holding a draw on the Monday night exclusively for non-spinnaker/coastal course boats. The first prize is a full refund of their entry fee and the second prize will be a bottle of wine for each member of the crew.
Sportsboats
First launched in 1994 at the Royal Cork Yacht Club, with the first European Championship held at Cork Week in 1998. The 1720 sportsboat class has undergone something of a renaissance in Ireland. As many as ten entries are expected for Volvo Cork Week, and for those familiar with the thrills and spills of the 1720, charter options are available, via the Royal Cork Yacht Club.
There will also be a nest of Vipers at Volvo Cork Week this year, the high performance skiff has proved extremely popular in the USA with hundreds racing across the country. At least four Viper 640s are expected to be racing at Cork Week including ‘Oh No!’ owned by Caroline Aisher and Julian Cook, from the Royal Torbay Yacht Club.
Cork Week is a great event; brilliant racing and course management and full of fun people who enjoy their sailing, on and off the water.” smiled Caroline Aisher. “We have raced the Viper both in the UK and abroad and we are really looking forward to racing for the first time in Cork. The conditions are just made for the boat.”
Charter Opportunities
If you want to experience Cork Week 2014 but don’t have a ride, it is not too late to get involved. Various charter companies are offering opportunities for individual, groups all or whole boat charter. Award winning British based sailing school, Sailing Logic are proud to enter two Beneteau First 40 yachts for Volvo Cork Week 2014 and still have places available on one of them.
“Lancelot II Logic is fully booked and will be skippered by Tim Thubron with a crew of nine amateur individuals who booked up Cork Week well in advance. The crew includes a policeman, interior designer, a physiotherapist, a surveyor and a lawyer amongst others! However, Sailing Logic also have places still available to join Arthur Logic, a brand new Beneteau First 40.” confirmed, Sharon Hayward.
Other charter companies information and more information about Volvo Cork Week can be found at the official web site: www.corkweek.ie