By gavin on January 6, 2016 in Uncategorized 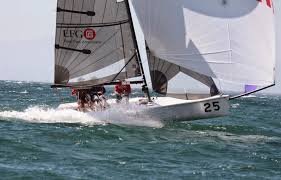 The Viper 640 One Design Sportboat will feature in Ireland this Summer at Cork Week Regatta in July. The class has added the Irish date to its international calendar.

Not yet a class in Ireland. the international Viper 640 is a two to four person, high-performance sports boat akin to the SB20 and 1720 sportsboats popular here.

There are 240+ Vipers in the USA and Canada, 28 in Australia and newer fleets underway in UK, Europe, Bermuda and beyond.

In addition to the UK 2016 sailing programme, the Viper has a heatlhy international regatta programme planned for 2016. Last March, Afloat sailor of the year Anthony O’Leary of Royal Cork, sailing with Howth’s Dan O’Grady and Cork clubmate Tom Durcan, competed at Miami race week in the Viper. The sole Irish trio’s best individual result was a fourth which they achieved twice in races two and six of the nine race series.

A UK 2016 sailing programme has been announced and there is an international regatta programme planned for 2016 too.

Following extensive trials in the USA, the Gulf Yachting Association (a group of 20 plus US Gulf-based clubs) have chosen the Viper 640 as their new club boat for the future, replacing the previous “Flying Scot”. This, together with a very active US sailing programme, has increased demand for the boat throughout the USA and Rondar are now in full production.