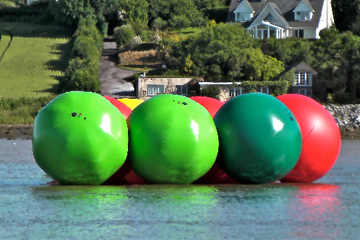 Competitors from all over the world have arrived in Crosshaven for the biggest sailing event in Ireland for 2010. The marina is buzzing with accents from Australia, Belgium, Canada, England, Fiji, France, Holland, Ireland, Isle of Man, New Zealand, Scotland, South Africa, United States and Wales.

Tomorrow marks the start of racing for Cork Week and by early evening the regatta village will be a frenzy of activity, as thousands of competitors enjoy the full hospitality of the Royal Cork Yacht Club.

Class Zero reads like a who’s who of high performance racer-cruisers; Dave Dwyer’s Mills 39, Marinerscove.ie is the in form boat, having been crowned us overall winner at last month’s RORC IRC National Championship, world class tactician, Andy Beadsworth is the linchpin of the team. Anthony O’Leary’s Ker 39, Antix is brimming with talent with some of Ireland’s best Corinthian sailors on board. French sister ship, Inis Mor owned by Bernard Gouy is a proven competitor and a frequent visitor to Cork Week. Mike Williamson’s King 40, White Heat has America’s Cup sailor, Simon Shaw at the back of the boat. All of these Class Zero boats will be competing in next month’s Rolex Commodores’ Cup. Richard Matthews’ Humphreys 42, Oystercatcher XXVI is the reigning class champion for Cork Week and will be tough to beat. Designer Tom Humphreys is on board, as is local legend Eddie English. Class Zero is looking like developing into a battle royale.

Cork Week plays host to the J/109 European Championship and there will be 18 one design boats racing in tight formation at the regatta. Andy Budgen is racing on Stalker, the Scot has won the Laser 5000 UK Nationals, 49er UK Nationals and placed second in the 49er Worlds. Ian Nagle & Paul O’Malley’s Jelly Baby, John Maybury’s Joker II and Brian Morton’s Juke Box are amongst the fancied boats to lift the European title but Ken Grant’s Scottish based, Tigh Soluis were second in 2008 and will be a potent threat.

In Class Two, Paul O’Higgins’ Corby 33, Rockabill V is a proven winner and is one of three boats in the class from Cowes yacht designer John Corby. No less than four Reflex 38s will be battling it out on the water. Including Sailing West, skippered by Graeme Johnson. Wouter Borghijs’ Belgian A 35, Tontin is also a well-fancied boat.

John Moorehead & Chris Ferres, J 35, Bengal Magic is back to defend the Class Three title. ISA measurer, Martin Darrer’s Projection 35, True Penance is a local boat that should feature, Darrer also races J 80s, on the match racing circuit. Strata 6 from Suffolk, England is entered by the East Anglian Sea School and is one of many schools that will be racing at Cork Week.

Class Four is the battle ground for the Sigma 38 European Championships. Defending champion is National Yacht Club’s Patrick Kirwan, helming Errislannan. There will be stiff competition from UK based boats including; Nigel Goodhew’s Persephone of London and Chris & Vanessa Choules’ With Alacrity. Including the Sigma 38 fleet, Class Four has eighteen entries including First 31.7 Alpaca owned by Royal Cork members, Paul & Deirdre Tingle and Michael Wallace’s X 332, Felix, with past Ireland and British Lion Rugby international, Paul Wallace amongst the crew.

Class Six includes James O’Brien, Kenefick & Kenefick’s Quarter Tonner, Tiger and the highly experienced J 24 exponent Flor O’Driscoll, helming Hard on Port. Tiger beat Hard on Port at the recent ICRA Nationals and it is highly likely that these two will feature at the top of the leader board. This is the most diverse class of boats at Cork Week, with fifteen different yacht designs mixing it up on the water.

For the first time at Cork Week, the sportsboat classes will raced on all of the courses, rather than just windward leeward. New Zealand’s Ben Duncan helming Sharkbait is the boat to beat in the SB3s. In the 1720s, Bryan Hassett’s Darkside counts son David amongst his crew. David Hassett has represented Ireland in the Rolex Commodores’ Cup and was Commercial Director at Green Dragon for the 2008-09 Volvo Ocean Race. Malcolm Thorpe’s King Louie is back racing in the class, after several years of absence.

There are two White sail classes at Cork Week with a total of 43 boats competing without spinnakers. National Yacht Club member, Philip Dilworth, will be racing Grand Soleil 42, Orna. A previous class winner of the Dun Laoghaire to Dingle race, 2008 Cork Week winner and class winner at the recent ICRA Nationals. Tom McNeice’s Sigma 33, Minx III is back to defend their class title from 2008. The combined class of White Sail boats is the largest at Cork Week.

Racing starts on Monday 12th July for all classes. Weather forecasts are predicting a light airs start but several low-pressure systems are being monitored as they cross the Atlantic. Later in the week, the 16th edition of Cork Week could well provide a wild ride for over 220 yachts competing at the regatta.

The secret of Cork Week’s success cannot be attributed to any one rule or aspect of it’s organisation. It’s success is found in the eclectic mix of classes, competitors, good courses, good company, our team of dedicated volunteers and the good humour of our 10,000 visitors.
View all posts by admin →
A Sailing Honeymoon at Cork Week
Costa del Cork