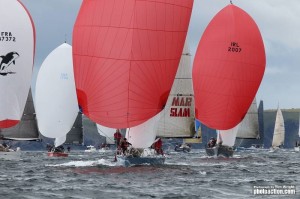 There was plenty of drama at the second day of racing at Cork Week. The day started with a gentle breeze, which built during the day to provide some electric action and plenty of incidents. With 18 knots of breeze towards the close of play, crew were hiking to the max. and boat handling became a much bigger issue than the previous day.

In IRC Zero, Piet Vroon’s Ker 46, Tonnerre de Breskens stamped their authority on the class, scoring two more bullets but it was far from straight forward, the Dutch flier won by both of today’s races on the Trapezoid Course by just a few seconds.

“The course today was very short, which makes it difficult to make up a time correction of 5 minutes an hour. I have to say that the two main reasons for our success today were the excellent way in which the boat is prepared and how well the crew handle the boat. I first came to Crosshaven in 1969 and I think the reason that I have been coming back for all these years is that the natives are so friendly and I have always been impressed by the high standards of the Royal Cork Yacht Club and this year is no exception.”

There was plenty of drama in IRC One today, Richard Goransson’s Corby 36, Inga from Sweden has taken over the class lead but an incident at a top mark with Howth entry Mills 37, Crazy Horse was caught on camera by the Cork Week TV crew. This may have an effect on the result of Race 4. However, last night’s leader, Richard Fildes’ Corby 37, Impetuous was called OCS in Race 3, scoring a debilitating 20 points. However, Impetuous came back strongly, leaping off the start line like a wild salmon, to win the last race of the day. Royal Cork’s Conor Phelan racing Ker 37, Jump Juice scored well today to move up to third overall.

“A light and shifty first race but the windward leeward course certainly suits us better than the Trapezoid course.” Admitted Diarmuid Foley. “Now we just have to negotiate the hazards ashore after racing but we are Cork boys so we know are way around the clubhouse!”

In the Non-Spinnaker Class, Dan O’Neill’s IMX 38, Xerxes has scored three clean bullets. Dan was raised in Annapolis, USA but has lived in Dublin for over 20 years.

“Xerxes has won many top regattas in the past but a few years back, I decided to stop racing at that level, mainly due to the cost. Also you need nine really good sailors but racing with just white sails we only need three good crew, leaving room on board for good friends who don’t have that much experience. Racing in this class is a great way to introduce people to the sport in a safe environment. This week I am sailing with my cousin, who is visiting Ireland for the first time from Missouri, USA and I can guarantee you, he is enjoying every moment of Cork Week.

After an energetic day out on the racecourse many of the thousand or so sailors gathered to celebrate Cork Week may well be in need of a sugar rush. Tonight blues and rock sensation, Death by Chocolate is ready to provide one!