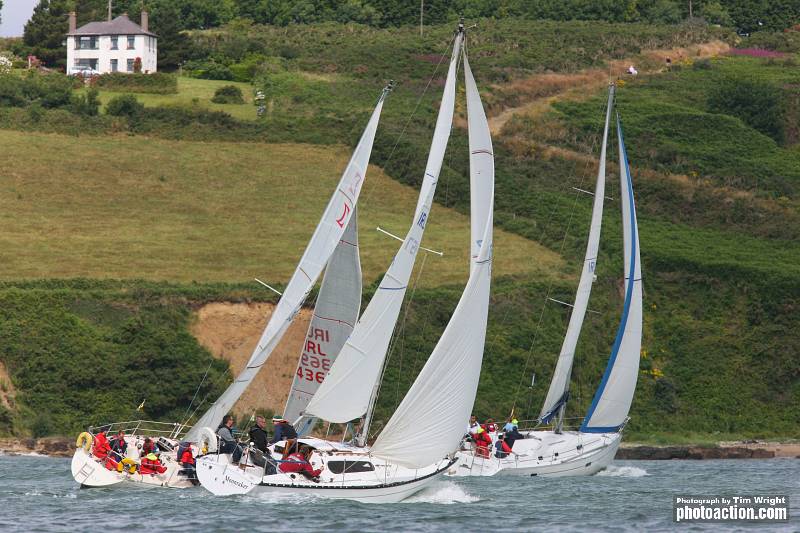 You could feel the tension on the dock, with virtually all the classes still to be decided, as the yachts motored out to the combat zone along the narrow confines of the Owenabue River. The conditions had eased from the previous maelstrom, but this was a day were smart sailing put boats in winning positions.

Watery sunshine, 15 knots from the northwest were to provide some tricky conditions for all classes. Cork Harbour and the surrounding area have huge land effects on the wind, especially today, the gradient made for constant changes.

It proved to be a day for keeping heads out of the boat, looking for changes in the weather. However, that is only one part of the overall puzzle. Boat-on-boat tactics and strong tides are also in the mix. Racing today at Cork Week was like a game of three-dimensional chess.

Johnny Vincent’s TP52, Pace came out on top after five days of thrills and spills in the big boat class. Austin Fragomen’s TP52, Interlodge was second but only on count back from Gray and Laidlaw’s Farr 52, Bob.

Tied on points, Fragomen’s TP52, shipped over form the USA to compete at Cork Week beat the Isle of Wight based Farr 52, by the virtue of winning one more race in the eight race series.

The Racing in Super Zero has been sensational this week but also pretty hard on the crew. Andy Oliver is the bowman on Johnny Vincent’s TP52, Pace. He first came to Cork Week at just 17 years of age and since then he has raced all over the world;

“I have got to say that was the toughest week I have had for a long time, all of the crew on Pace did a great job, not just the bow but working on the pointed end with the boat screaming along at 24 knots is pretty tough! Cork Week is very unusual, in that it has a huge variety of courses that intensifies crew work. We are all a bit tired, but a fair few of the crew on Pace will be looking forward to a couple of pints of the black stuff in the yacht club after the prize giving.”

Dave Dwyer’s Mills 39 Marinerscove.ie had a bad start to the regatta but showed great tenacity to come back with a vengeance to win the highly competitive class on the last race, as tactician Andy Beadsworth explains;

“We have made a few changes to the boat this season, including increasing the sail area to give the boat better light wind performance for the forthcoming Rolex Commodores Cup. A windy Cork Week answered a few questions about how we would go in heavier air. Our two results at the beginning meant we were playing catch up and we just kept chipping away. It has been a great regatta, a real punch-up with some well sailed boats.”

Bernard Lambilliotte’s Swan 45, Nemo of Cowes has been the boat to beat in Class Zero, all week and will obviously be disappointed to lose out on the last day. Anthony O’Leary’s Ker 39, Antix was third but finished the regatta in good shape.

The crew on Greg Burgess’s J 109, Bluejay punched the air with delight, after taking the gun in the first race of the day. All of the crew is from Wales and apart from Burgess, are all young lads as an ecstatic Burgess explains;

‘We all go snowboarding together and we have never raced the boat as a crew before. I am 55 but although I am getting old, I feel like an 18 year old today! We didn’t expect to win this in our wildest dreams. I stopped racing the boat three years ago, to drive my son around, competing for the British Optimist Team. The crew come from Swansea, Cardiff and North Wales, they have all been sleeping on the boat and partying every night. What a week!”

There was an incredibly close finish in the last race, as the top three boats were separated by 26 seconds, on corrected time. Conor & Denise Phelan’s Ker 37, Jump Juice snatched the class title by a single point from Robert Davies’ Welsh team on Corby 36, Roxy 6. British Corby 37, Impetuous were third.

These three boats had a titanic struggle all week, especially as they were often side by side on the water. None of them scored worse than a fourth in the seven race series. IRC One produced probably the closest racing of any of the classes racing at Cork Week 2010. Jump Juice were also class champions in 2006.

Conor and Denise are based in Cork and feel Cork Week is a special regatta.

“Since Denise decided to buy Jump Juice, we have raced in the Solent, Scotland and Dun Laoghaire but Cork Week beats them all; the race management is first class and the variety of course and conditions always makes it interesting. We had incredibly close racing this week. It has been absolutely fabulous,” commented a delighted Conor Phelan.

Paul O’Higgins’ Corby 33, Rockabill V started the regatta in fine form but faltered half way, it was only on the last race that they came back, to clinch the class title from Sailing Logic’s Reflex 38, Visit Malta Puma with Rob Mc Connell’s A 35, Fool’s Gold, finishing strongly to take third.

Paul O’Higgins, owner of Rockall V sums up the week; “I think the crew on Rockabill V got a bit too complacent after a good start and enjoyed the full facilities of Cork Week, the day before we had a very breezy day, so some of the hard work was our own doing! However, all credit to the opposition, Puma and Fool’s Gold sailed well and were worthy opponents.”

John Moorehead & Chris Ferres J 35, Bengal Magic have had a cracking week and finished in style by taking a fifth win in the last race of the series but only be 15 seconds from Richard Calveley’s Elan 37, Va Va Voom. Ross McDonald’s X 332, Equinox will have enjoyed the fresh conditions at Cork Week and claimed second, by some distance from Martin Breen’s Harley 33, That’s Life!

Paul Kirwan’s Sigma 38, Errislannan were assured of both the class title and European Championship and did not compete in the last race. Leaving Paul & Deirdre Tingle’s First 31.7, Alpaca and Conor Ronan’s Corby 26, Ruthless to battle it out for third. Alpaca beat Ruthless in the last race of the series to take the runner-up spot for the class with Ruthless third overall.

Vincent O’Shea’s Corby 25, YANKS $ FFRANCS have had a great Cork Week and won the class by an eight point margin. The Corby 25 is often racing in close quarters with sister-ships and with 14 boats on the start line and many other boats in the race area, this was a factor in their ability to stay out of trouble and win the class.

John Allen’s X 302, Antix finished in style, winning the last race of the series by just 29 seconds. Ted Crosbie’s X 302, No Excuse was third in class. Event Chairman, Peter Deasy was racing on Sunfast 32, Bad Company. He was disqualified from the last race, proving there is fair racing for all at Cork Week!

O’Brian, Kenefick and Kenefick’s Quarter Tonner, Tiger is a real head turning boat and was the only yacht to post straight bullets for the regatta but it wasn’t as easy as the score line suggest and it never is, as co-owner, James O’Brien explains; “Flor O’Driscoll is a top sailor and we had to be at the top of our game this week, especially as we needed to be ahead of him on the water, because of our handicap. It has been a hard week and a fair few of us are over 50, so we are a bit tired to be honest. But I ran this event in 1990 and I have never won it, I didn’t think that it would take me 22 years.”

Michael Wilson’s 1720, YKnot was in impressive form all week, scoring eight podium finishes to claim the class title. Bryan Hassett’s 1720, Dark Side was runner up and the two Hassett brothers were enjoying a pint at the Royal Cork Yacht Club after racing with other 1720 crews. Great racing and camaraderie, is what Cork Week is all about. Malcolm Thorpe’s 1720, King Louie won the last race of the series to claim third but only on count-back from Denis Murphy’s Aquatack.

Ben Duncan and Brian Moran’s Sharkbait bit back after being called OSC in Race 5, to hold off Trevor D’Arcy’s Bullet. Race 6 was a photo-finish, with just six seconds separating the two. Bullet won the penultimate race, putting pressure on Sharkbait but they held there nerve to take the last race and the class title by 19 seconds. Ronan Downing’s SB3, Ronan Downing’s Profile Park was third.

Class winner Ben Duncan was disappointed to miss out on racing on Thursday but he was delighted to come to Cork Week.

“We wanted to race, especially after getting called over the line the previous day but we made the most of it by going for lunch on our enforced lay-day at the stunningly beautiful East Ferry, in Cork Harbour. We have had a great time here in Cork.”


White Sail One and Two

46 boats competed in the two classes over the regatta and they enjoyed a picturesque finale to Cork Week 2010 with the Harbour Race. The White Sail fleet are composed of teams that don’t want to put together a full on race crew and prefer to sail with a smaller group of family and friends. What’s more, many of these boat would not be competitive against the more high performance boats in the other classes. The White Sail Class gets them off the moorings and out into some of the best sailing grounds in the world.

In White Sail One, Philip Dilworth’s Grand Soleil 40 Orna was the winner and in Class Two, McCarthy, Clarke & McMullin’s Half Tonner Harmony was first in class.

It was decided that the Boat of the Week for Cork Week 2010 should be jointly awarded. 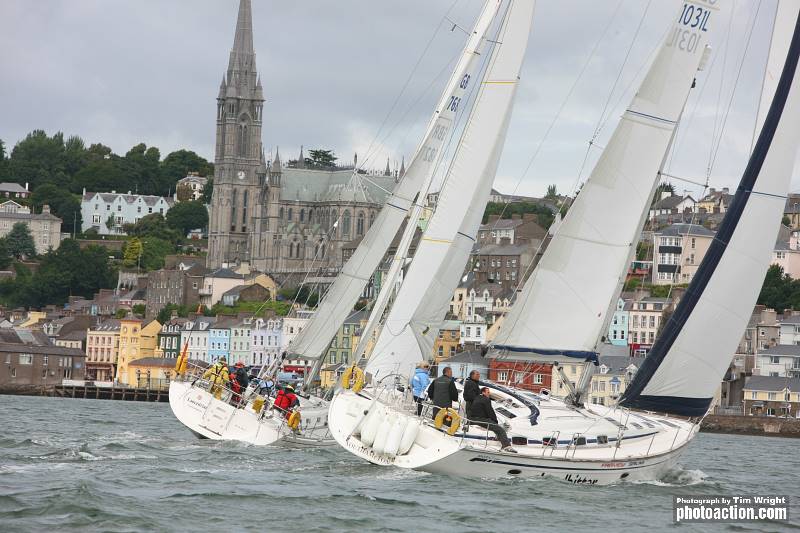 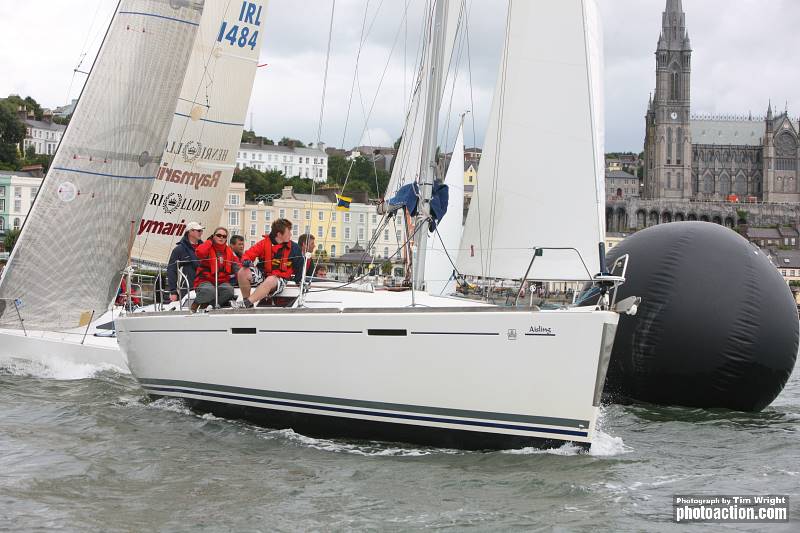 The secret of Cork Week’s success cannot be attributed to any one rule or aspect of it’s organisation. It’s success is found in the eclectic mix of classes, competitors, good courses, good company, our team of dedicated volunteers and the good humour of our 10,000 visitors.
View all posts by admin →
Big Thursday
Prizegiving – Cork Week 2010