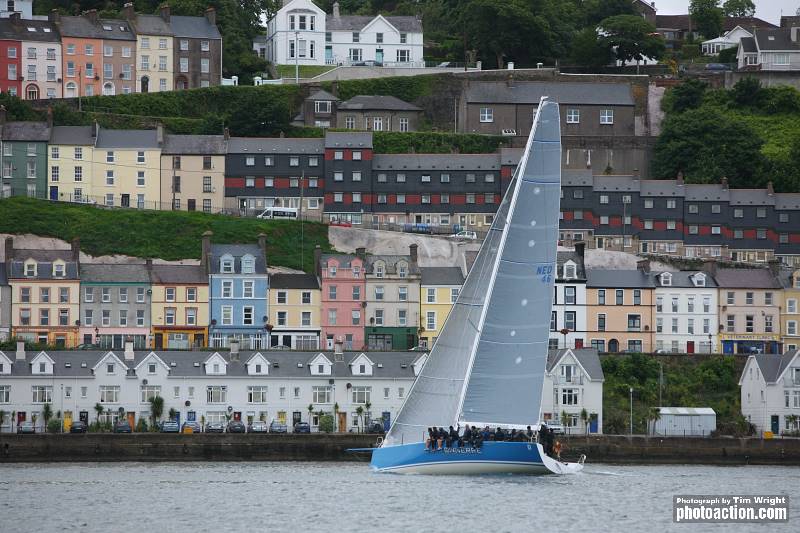 Like a fine seafood platter, Cork Week dishes up a huge variety of courses and today’s Harbour Race was the centrepiece of a phenomenal week of racing.

The entire international fleet racing at Cork Week enjoyed a scenic race in Cork’s historic harbour. The weather may have closed in once again but the myriad of racing boats parading passed Cobh provided a spectacular finale to what has been a very special regatta.

In IRC Zero, Piet Vroon’s electric blue Ker 46, Tonnerre de Breskens streaked away right from the start to take line honours by a significant margin. Frank Gerber, mainsheet trimmer, has been a long time member of a solid team and he was quick to praise the boat captain, Matt Trautmann and first mate, Jack Boutelle. “Matt and Jack are the unsung heroes of our success, Tonnerre is immaculately prepared for racing and that means we can concentrate on going the right way and fast. Also tactician Dave Lenz hasn’t missed a shift all week and the crew has pulled off every manoeuvre. This is the first big win for us for some time, we came second in the Round Ireland Race and choked on the last day of the RORC IRC Nationals, so it has been fantastic to come here and win, Piet is absolutely over the moon.”

In IRC One, Richard Fildes’ Abersoch based Corby 37, Impetuous held off a strong challenge from Royal Cork YC member, Conor Phelan racing Ker 37, Jump Juice. “To have a realistic chance of beating Impetuous we needed them to have a bad day and we had a go at them from the start.” Explained Conor Phelan. “We did manage to slow them down and we had an excellent first part of the race but Impetuous came back well to hold onto their overall lead and I would like to congratulate them on a fine win.”

It was all to play for in IRC 2 with two yachts vying for the class win and the title of 2012 Irish J/109 National Champion. After two legs of the Harbour Race, Hall & McDonell’s Dublin based Something Else led the charge but Ian Nagle’s Jelly Baby made a decisive move on the beat past Roches Point to gain the upper hand. Royal Cork’s Jelly Baby never looked back and won the last race of the regatta to win both the class and the J/109 Irish Championship.

In IRC 3, Tim Cunliffe’s Half Tonner, Insatiable won today’s Harbour Race to take second overall. The team are all from Cornwall and the vintage half tonner was beautifully restored at the famous Pendennis Shipyard. However, the clear winner of the class was the Royal Cork Yacht Club Admiral, Peter Deasy with his Sunfast 32, Bad Company. Diarmuid Foley’s Quarter Tonner, Anchor Challenge was third overall.

In IRC 4, John Twomey’s Sonar, Baileen Ban won today’s race scoring their fifth win of the regatta. John’s next event will be the Paralympic Games in Weymouth and everybody at Cork Week wishes the Kinsale man good luck in the Games. Claridge & Fox’s Sigma 33, Excelle scored their fifth podium finish of the regatta to clinch second place just ahead of Finbarr Dorgan’s Sonar, No Half Measures.

In the 1720 Class, Robin & Ben O’Mahony took the gun today putting pressure on overall leader Denis Murphy’s Aquatack. However, Aquatack managed a third place to hold on to the class win.

In the White Sail Class, Mike Bailey & Andy Roy’s vintage Swan 46, Something was a late starter to Cork Week, missing the first day of racing. However, the vintage Swan had a fantastic battle with Dublin skipper Dan O’Neill steering IMX 38, Xerxes. Something won the class title with Xerxes second. Annie O’Sullivan Elan 37, Diamonds are Forever won today’s Harbour Race to claim third in IRC. The all girl crew have never sailed as a team before and have been improving their performance as each day has gone by. Their dedication to partying is also most noteworthy, as the Girls for Sail charter team have been the last out of the party tents just about every night!

In White Sail Two, a close encounter between two yachts from the Royal Cork Yacht Club was settled today. Tom McNeice’s Minx III came out on top but the Sigma 33 had an epic battle with Conor O’Donovan’s X-372 Xtension. Xtension won the last two races of the regatta but it wasn’t enough to beat their club rivals and McNeice’s team were declared class winners.

Cork Week Racing Chairman, Anthony O’Leary has been racing his Ker 39, Antix all week and narrowly missed out on beating Tonnerre de Breskens in today’s Harbour Race by just 25 seconds. “ I think that the overall standard of racing this week has been very high, both from the competitors and also the race management team. With the wind mainly in the northwest, setting courses is not easy and for a variety of reasons I think that the race management team have done an excellent job. In difficult conditions, we only lost two races, which is a credit not just to the race officers but also to the entire team, I would also like to add that everybody wishes Martin Stephens a speedy recovery from an injury sustained whilst laying marks at Cork Week.”

After tonight’s Final Prize Giving, The Papa Zitas will close out the evening entertainment. Recognised as are Ireland’s definitive Motown Big Band experience. Their 10-piece outfit will deliver a set of 1960’s Motown classics to conclude a memorable and fun filled week.

View all posts by Louay Habib →
Live Updates: Final Day
The Final Round up of Results & Images from Cork Week 2012 Prizegiving