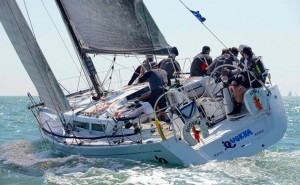 Maurice ‘Prof’ O’Connell will be crew boss for the Grand Soleil 43, Quokka, at Volvo Cork Week. Quokka, co-skippered by Niall Dowling and Michael Boyd will be part of the Irish team at the Brewin Dolphin Commodores’ Cup. “ Cork Week will be our last event before the Commodores’ Cup.” confirmed Prof. “We will have the full team racing the boat and we will be flying the flag in Ireland for the last time before the big event based in Cowes. Cork Week provides the perfect preparation in terms of the different types of course and I believe their will be a number of races each day, so we will be leaving the dock before 9 a.m. and out on the water until after 4 p.m. Essentially we will be spending a full day on the water, taking part in races that are very similar to our main event, Cork Week will mimic the Commodores’ Cup inshore races, there is no more an ideal preparation for us to bring the team to the boil.”

Cork Week is famous for fantastic race courses set in the Atlantic Approaches and Cork Harbour, providing a variety of racing that is difficult to better. However, the X-Factor at any successful regatta comes from the people who take part and Volvo Cork Week has characters in abundance. Every team comes to Volvo Cork Week looking for success but the legendary ‘Cork Craic’ is just as appealing as the racing. 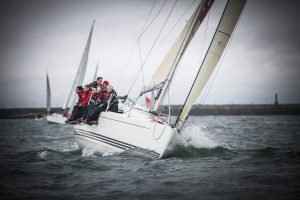 British sailor, Andrew Jones now lives with his young family in Dublin. Andrew will be the skipper of X-43, Fox in Sox for Volvo Cork Week.

“We’ve managed to scrape together a motley crew of elderly Dublin Bay racers, sleep-deprived Dads, anti-social short-handed offshore guys, Fastnet novices, oh and a former hot-shot Italian helm.” commented Andrew. “We’re looking forward to our first Cork week with Fox in Sox and hope to have some laughs…and we might just be one to watch if we can make our boat fly! I have put the crew together from contacts made during the 2011 Fastnet campaign and friends at the Royal Irish Yacht Club. I’m the only Brit, the rest are Irish and Italian. Some of the crew have done Cork week before on other boats but this will be my first time. It’s the major Irish regatta this year, so it’s a must do for us.”

Tony Kingston’s 33ft Dehler, Luv Is, from Kinsale was one of the first entries, Tony and his wife Alice, a former Commodore of Kinsale Yacht Club, and have competed many times at Cork Week. 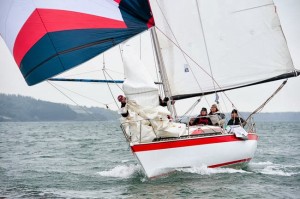 Alice trims mainsheet upwind and spinnaker downwind. She has completed thousands of miles of cruising and racing and has the reflexes of a mongoose, having put up with my helming for longer than we care to remember!” laughed Tony. “Choryna handles the pit and helms her own Dragon when she is not sailing with us but the iffy clutches and wonky winches are no bother to her. Miah, a cattle rancher from West Cork, takes care of the bow. He prefers heavy weather and is never happier than when the wind is high. He has done at least five Round Ireland’s and a few Fastnet races and prefers offshore racing but will tolerate the short races. He has no interest whatever in how we do in a race: Times, results, classes and handicaps do not interest him at all. Two Laser sailors in their twenties complete the line up, giving the team a big input into tactics, they can read the race and the race area better than the previous generation most of the time.

My tuppence worth of advice for first timers at Cork Week, is to sail conservatively and prudently on day one. Give way early and avoid damage at all costs. Whether right or wrong, damage will ruin your week. Better to give up half a boat length than spend the day at the protest room or boat yard. Everyone is more relaxed after the first day. Also, remain civil afloat, as you will meet ashore at some stage and you may well find that you spend the whole week afloat with the same small group of boats, as if tied by an invisible string. Much better to make friends day one and enjoy it. We still meet friends we made on the water twenty years ago.”

Gavin Deane, General Manager of the Royal Cork Yacht Club commented on the affect that the title sponsorship from Volvo will have on the event.

“Having Volvo as partners for Cork Week is fantastic news for the competitors.” commented Gavin. “The Royal Cork Yacht Club will be investing all of the funds towards Volvo Cork Week. The money will be used to support great race courses and the partnership has enabled us to vastly reduce the entry fees. The minimum saving for boats will be 40% and as much as 70% in some cases. The club will also be giving complimentary car parking to competitors, which has been an issue in the past, and providing more afternoon entertainment. When people are coming in off the water, soul bands and other live music will be playing, hopefully the weather gods will smile on us and after great racing, there will be a great Craic ashore. Those are the goals for Volvo Cork Week 2014.”