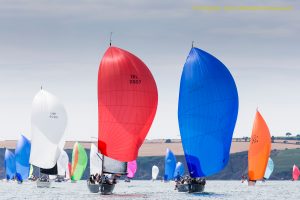 85 yachts formed an impressive single starting line for Volvo Cork Week’s signature race in the beautiful surroundings of Cork Harbour. After a General Recall the fleet readied themselves for a Black Flag restart, which was far from conservative, many of the massive starting line up hitting the line on the B of the Bang! A kaleidoscope of spinnakers made for an amazing sight as the fleet entered Cork Harbour for close quarters racing past Spike Island and Cobh. Race Officers Jack Roy and Rob Lamb were roundly applauded at the daily prize giving for their teams efforts in producing a great day of racing. 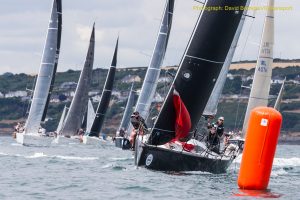 The Beaufort Cup switched to inshore mode for the Harbour Race. Barry Byrne’s Irish Defence Force team, racing Joker 2, pulled off a Harry Houdini Act to win the race by just seven seconds from Simon Coveney’s Irish Defence Forces Team, racing Jedi. Joker 2 was deep down in the class rounding in front of Cobh, but came back with some tenacity. The two J/109s were overlapped going through the finish line, Jedi took the gun by one second but Joker 2 was the victor after time correction. Youen Jacob’s Baltimore RNLI team, racing J/109 Juggerknot was third. Joker 2 now has a three point lead in their defence of the Beaufort Cup. Jedi and Juggerknot are tied for second place. 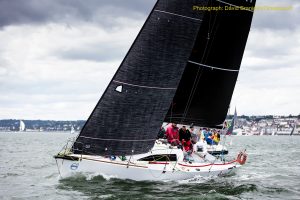 In IRC Three, John Swan’s Half Tonner Harmony (Howth YC) took a game changing win to go top of the class, scoring the fastest corrected time under IRC from all of the 85 starters.

“We got a great start and that put us in clear air after the top mark, which really helped us position the boat for good downwind speed.” commented Harmony’s John Swan. “In Cork Harbour the boys did a great job on the manoeuvres, so it really came together well.”

In IRC Two, Brian & Mary Jones’ J/109 Jelly Baby (Royal Cork YC) put in a strong performance to win the Harbour Race and in doing so lead the class for the series after three races but only on countback from Dunlop & Cox’s J/109 Mojito (Pwllheli SC).

“Great racing today, absolutely perfect conditions and a great course.” commented Raptor’s Denis Hewitt. “I have done this race so many times and always messed it up somewhere but we have some top local knowledge on board from Barry Rose and great sailors like Fintan Cairns. To be honest I just did what they told me, and we hardly put a foot wrong.”

Aidan Heffernan’s Dehler 36 Indulgence (SHSC) corrected out to win the Harbour Race in Non-Spinnaker IRC One, ahead of Broadhead, Collins & Stuart’s Sigma 38 Persistance (Royal Irish YC), which leads the class with the lowest net point score for the regatta. Pat Vaughan’s Sigma 33 Aramis (Royal Cork YC) was the winer of Non-Spinnaker IRC Two. 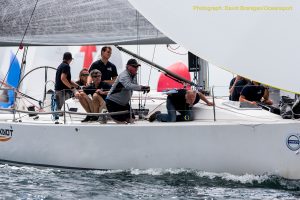 Volvo Cork Week continues tomorrow, Thursday 19th July, with three short sharp races scheduled for most of the IRC Classes, as well as the start of the One Design Southern Championships for the 1720 Class and the International Dragons.