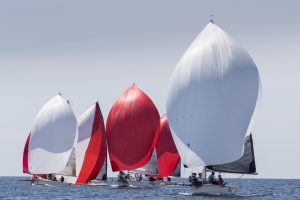 Anthony O’Leary’s Antix (right) leading the fleet at the start of racing for the One-Designs and 1720 Sportsboats.
Photograph: David Branigan/Oceansport

The full armada of 120 yachts was out for the fourth day of Volvo Cork week. After a delayed start, a warm sea breeze blew into Volvo Cork Week to give over a thousand sailors champagne conditions in the Celtic Sea outside Cork Harbour. Leaders in all classes are emerging but many of them will be going to the wire. A pride of 13 Dragons and 10 powerful Cork 1720s started their Southern Championships today, taking part in two races with a building sea breeze off Power Head on a windward leeward course. 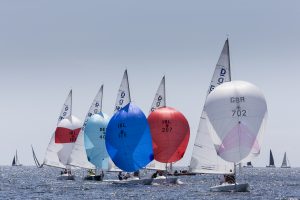 Jamie Frame’s Moonshine (right) from Glandore on the first day of racing for the One-Designs and 1720 Sportsboats.
Photograph: David Branigan/Oceansport

The Dragons were flying by the second race, with 15 knots of wind over tide powering the fleet up to full tilt. The racing was exceptional close, and by the end of two contests, three teams were tied at the top. Daniel Murphy’s Serafina and Cameron Good’s Littla Fella, both from Kinsale YC, and Denis Bergin’s Sir Ossis of the River (Royal Irish YC).

Daniel Murphy’s Serafina and Cameron Good’s Littla Fella were having a pint at the Royal Cork Yacht Club after racing, and both agreed: “In recent years, the Irish Dragons have organised their own events but we decided that we wanted to have a bit of a change from that and take part in bigger regattas. Volvo Cork Week has a much bigger social scene, and we know many of the sailors taking part in the other classes, which makes for great socialising after racing. The Royal Cork has made us feel very welcome, mooring us all together, and the race management and courses today were excellent.”

Anthony O’Leary’s Antix leading the fleet at the start of racing for the One-Designs and 1720 Sportsboats.
Photograph: David Branigan/Oceansport

For the first day of the 1720 Southern Championship, Anthony O’Leary’s Antix (Royal Cork YC) won both races. A late crew replacement for Tommy Murphy due to illness, led to 11 year-old Harry Moynan from Templebreedy National School Crosshaven, stepping on board Antix for his first taste of Volvo Cork Week. “It was great racing with my dad and such great sailors, I race in the Opi class at the Royal Cork, but I have never raced like that before. I was pumping the main downwind in the first race, and helped get the main in at the bottom mark.” commented Harry Moynan.

“It is great to see the 1720s and Dragons out for Volvo Cork Week.” commented Anthony O’Leary. “The 1720s are naturally part of this event but the Dragons have not been racing here for some time, and they have received a warm welcome by the Royal Cork. The race committee put on a very good course for us today. We were a little under crew weight, which helped in the first race as the wind was light, but for the second race, we paid the price when the wind got up. David Love (Mini-Apple) was pushing us very hard.”

For the Beaufort Cup, Barry Byrne’s Irish Defence Forces team, racing J/109 Joker 2, still lead the series but their lead has been cut down to just three points after two races today. Youen Jacob’s Baltimore RNLI team, racing J/109 Juggerknot, moved up to second place, and could have gone into the lead, but for a headsail problem in the first race. Denis & Annamarie Murphy’s Crosshaven RNLI team, racing Grand Soleil 40 Nieulargo, won both of today’s races to move up to third for the series.

“We sat down as a team at last night’s Gala Dinner, and talked long and hard about giving it are all for the rest of the regatta, and everything went very well today.” commented Dennis Murphy. “ Nieulargo is heavier than the J/109s so we love a bit of breeze, and we hope that will continue tomorrow.” 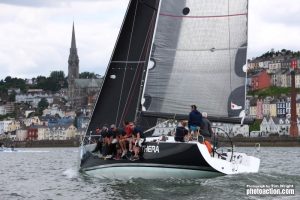 After six races sailed the discard rule has come into force for the class. John Swan’s Half Tonner Harmony (Howth YC) has maintained their lead, but only by a single point from Kieran Collins Olson 30 Coracle IV (Royal Cork). Both teams scored race wins today. Ronan & John Downing’s Half Tonner Miss Whiplash (Royal Cork YC) won the last race of the day, staying in touch, just two points off the lead.

Rory Fekkes’s Quarter Tonner Fn’Gr8 (Carrickfergus SC) was in fine form on today’s windward leeward course, smashing out two bullets to take a strangle hold on the series. Denis Byrne’s Trapper 25 Cracker (Royal Cork YC) is in second place, but only on countback from Paddy Kyne’s X-302 Maximus, which won the first race of the day.

In IRC 1 Non-Spinnaker, a two-horse race has developed between the leading yachts. Broadhead, Collins & Stuart’s Sigma 38 Persistance (Royal Irish YC), and Aidan Heffernan’s Dehler 36 Indulgence (Schull Harbour SC), are locked in a battle royale. The two teams have won every race in the class so far, but Persistance has held onto the lead, after scoring two bullets today. Clodagh O’Donovan’s Roaring Forties (Royal Cork YC) is third. 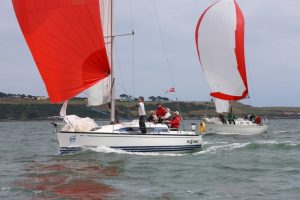 Anthony O’Leary’s Antix (right) leading the fleet at the start of racing for the One-Designs and 1720 Sportsboats at Volvo Cork Week 2018.
Photograph: David Branigan/Oceansport

Racing for the IRC Classes at Volvo Cork Week will conclude tomorrow, Friday 20th July, The 1720 and International Dragon Southern Championships will race through until Saturday 21st July.