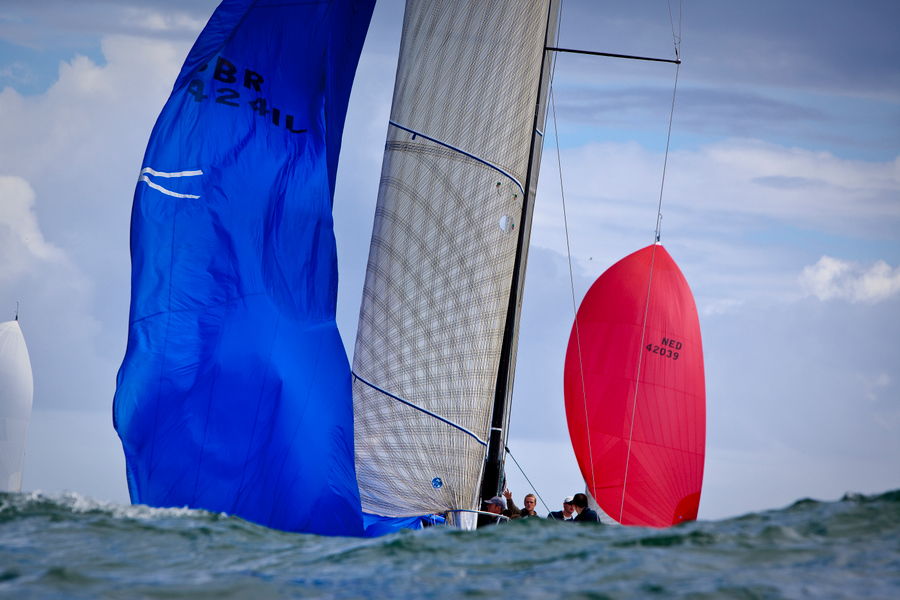 Big breeze and lumpy seas created some mind-boggling action at Cork Week on Day Three of racing. Torrential rain in the early morning, gave way to some sublime sunshine giving the competitors some classic Irish sailing along the rugged coastline. 15-18 Knots of breeze from the south with wind over tide, created a mogul-field of swell with waves nudging three metres at times.

The carbon-fibre flyers were racing on the tactical windward leeward course with the stunning backdrop of rocks near Roberts Cove. These boats light up in big conditions and the TP52s were an awesome sight surfing through the waves.

Gray and Laidlaw’s Solent based Farr 52, Bob and Austin Fragomen’s American TP52, Interlodge won a race each today putting pressure on Johnny Vincent, TP52, Pace who is still top of the class but Bob is now just two points behind them. Paprec Recyclage and Interlodge are tied for third place just behind the front two runners.

Many of the crew on Gray and Laidlaw’s Farr 52, Bob have sailed on the boat since she was first built in 2000. John Brinkers is one and was pleased with their performance today.

“That was tough going, especially the sea state, we got nailed a bit in the first race when the breeze died down for a stage of the race. The TP52s had made their time on us and in the fading breeze we couldn’t catch them up but we sailed well in the second race. Bob got a great start and managed to hang onto the TP52s upwind and rounded pretty much with them. The big call of the day came on the second lap. We spotted a shift and took a different side of the course to the other boats, we got right back at them to take our first win and put us right in the mix.”

David Dwyer’s Mills 39, Marinerscove.ie had another solid day, posting a first and a third, pouring pressure on the class leader. Bernard Lambilliotte’s Swan 45, Nemo of Cowes is still leading but the margin has shrunk to just four points ahead of Marinerscove.ie. Kieran Twomey’s Corby 38, Gloves Off with Irish Olympic sailor, Mark Mansfield at the helm, is third on tie-break with French Ker 39, Inis Mor owned by Bernard Gouy.

It was all smiles on Robert Davies, Corby 36, Roxy 6. Two races and two bullets sneaked them into first place on the leader board by virtue of more first places than Conor Phelan’s Ker 37, Jump Juice. These two are both locked on nine points with Richard Fildes’s Corby 37, Impetuous, still very much in the hunt, on eleven points.

Greg Burgess’ Blue Jay had a perfect day on the Olympic Course and now have a commanding lead in their quest to win the European crown. There were two bullets today for the Welsh team of young Cardiff Bay J 80 sailors led by Burgess. Brian Moreton’s Jukebox is having a consistent set of results and was rewarded by claiming second place overnight. Robert O’Leary’s Jeroboam did not have the best of days and drops down to third.

Donal O’Leary’s X 35, D-Tox had a sensational day on the water, winning both of today’s races and propelling them above Paul O’Higgins’ Corby 33, Rockabill V and Sailing Logic’s Reflex 38, Visit Malta Puma. The IRC Two Class was on the Olympic Course today with the fleet screaming down the reach in flat water and excellent breeze. The class looks set to go to the wire, with the top three boats only separated by a single point, after discard.

This morning, John Moorehead & Chris Ferres J 35, Bengal Magic had won every race but they were not as flash today on the Slalom Course. This allowed title contenders to close the gap; Ross McDonald’s X 332, Equinox revelled in the heavy weather in the second race, taking their first win at Cork Week. Dermot Cronin’s J 35, Mumbo is in third.

Vincent O’Shea’s YANKS $ FFRANCS is a light fast, Corby 25 and today’s lumpy conditions were not ideal but the team started and sailed the boat with precision and determination. Taking second place in the only race of the day, to keep a stranglehold on the Class. Denis Coleman’s sistership, Thunderbird did not fair as well, coming seventh in the only race of the day for the class and remains in second place but lost precious ground on the class leader. John Allen’s X 302, Antix still lies in third place.

This class is looking like turning into a two-horse race between skippers who know the marvelous stretch of water as well as anyone. James O’Brien, Kenefick & Kenefick’s Quarter Tonner, Tiger and Flor O’Driscoll’s J 24, Hard on Port. The Kenefick family live right on the Owenabue River, opposite the Royal Cork Yacht Club and Flor O’Driscoll was born in Cork and has sailed here all his life. Tiger has a straight run of five bullets but Hard on Port has been giving Tiger a good fight. Tomorrow, Flor’s team on the J 24 will need to beat Tiger on the multi-manoeuvre slalom course, if they are to have any chance of winning the class.

O’Driscoll will be a happy man, win or lose, as he explains, “I have been to every Cork Week bar one since 1988. Today was my favourite course, the Harbour Course. The big boats will be there on Friday. Where else can you see boats like that racing inside a natural harbour?”

Michael Wilson’s 1720, YKnot didn’t win either of today’s two races but two second places cemented their position at the top of the class. Bryan Hassett’s 1720, Darkside and sistership, Denis Murphy’s Aquatack, both scored victories today but slipped up in the accompanying races to fall behind YKnot. Tomorrow sees them tackle the tricky Slalom Course.

Ben Duncan & Brian Moran’s SB3 Sharkbite had a shocker today; being called over the start line on the Harbour Course picking up an 11th place. They are still leading, by virtue of discarding the race but are now far more vulnerable than this morning. Trevor D’Arcy’s SB3 Bullet lies in wait, just four points behind Sharkbait. The SB3 Class is back in the balance. Ronan Downing SB3, Profile Park, also fell foul at the start but still lies in third place.

White Sail Two is looking to have a clear favourite, Jerome McCarthy, Clarke & McMullin’s Half Tonner, Harmony took a brace of wins today. The Rob Humphreys yacht was built in 1980 by RJ Priors and Sons and won a huge number of races at the height of IOR racing. Billy Duane’s Sunlight 30, Expression had another great day on the water. The 30 footer was dwarfed by the sea swell and excellent seamanship resulted in two second place finishes. Tom McNeice’s Sigma 33, Minx III failed to come to the starting area but still remains third.

Tomorrow, the forecast will be for some mighty big weather in and around the shores of Cork Harbour. However the weather this week has been very unpredictable and highly volatile, so who knows! Tomorrow is the penultimate day of Cork Week 2010, if the big boats do go out, it will be on the most exposed part of the racing area.

This evening the sun is out and setting over the tented village around the Royal Cork Yacht Club. Competitors will be looking forward to a concert on the main stage featuring Rock ‘n’ Roll band, FRED. Last night, The Marvels turned the dance floor into a sea of jumping party people, Cork Week will surely be rocking again tonight. 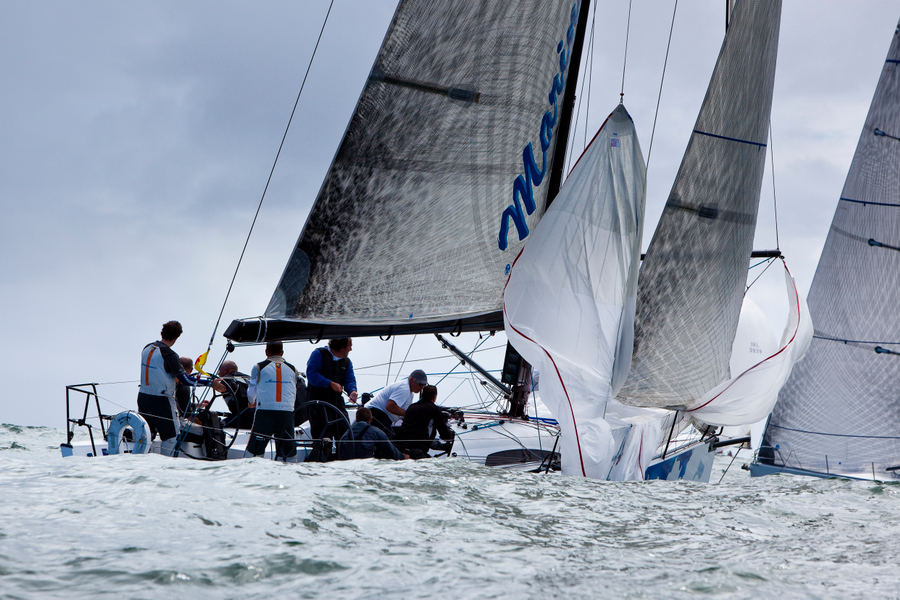 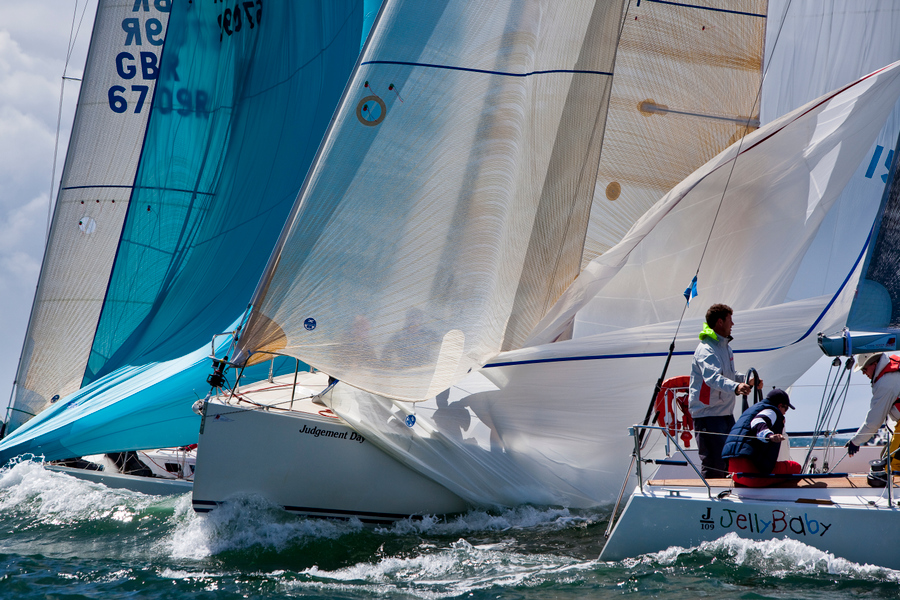 The secret of Cork Week’s success cannot be attributed to any one rule or aspect of it’s organisation. It’s success is found in the eclectic mix of classes, competitors, good courses, good company, our team of dedicated volunteers and the good humour of our 10,000 visitors.
View all posts by admin →
Quick out of the Blocks!
Big Thursday