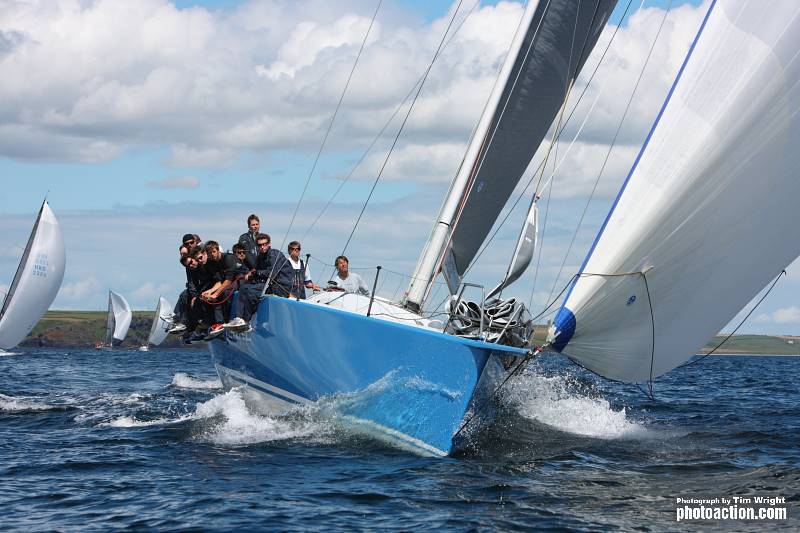 It may be a ‘boutique’ edition of Cork Week but there is a fantastic buzz at the Royal Cork Yacht Club and with the sun bursting through the clouds and a moderate to fresh breeze of 15 – 20 knots, the racing area south of Roches Point was a truly spectacular location for Ireland’s longest running and most prestigious sailing regatta.

With a discard kicking in, Richard Fildes, Corby 37, Impetuous returns to the top of the class, scoring a first and a fourth in today’s races. Richard Goransson’s Corby 36, Inga from Sweden was desperately close to a win in the opening race of the day, missing out by just ten seconds. However, a lowly 7th place in the last race means the Swedish yacht has now lost the class lead. Royal Cork member Conor Phelan, helming Ker 37 Jump Juice had another solid day to claim third overall. “We’re enjoying it, sailing well and hanging in there.” Declared Phelan shortly after racing.IRC One is proving to be very competitive and no place for the lily-livered.

In IRC Two, Hall & McDonnell’s J/109, Something Else leads the class with two more solid results today. However, Ian Nagle’s local J/109, Jelly Baby had a better day and has closed the gap on their rivals for both the class and the J/109 Irish title. Gilles Caminade’s A 35, Chenapan scored a first and a second today, moving the French team up to third overall.

“Jelly Baby goes well in good breeze and we certainly got that today.” Explained Jelly Baby’s tactician Killian Collins. “Getting away well was important today and we liked the pin end and really went out to win the starts. With the discard kicking in, we are just a couple of points off the lead and with a big fleet, we can easily make that up in just one race, so its all to play for.”

It’s tight at the top of IRC Three. Royal Cork Yacht club Admiral, Peter Deasy had a very good day at the office. His Sunfast 32, Bad Company won both of today’s races, putting the team from Cork just half a point behind the class leader, Diarmuid Foley’s Quarter Tonner, Anchor Challenge. Tim Cunliffe’s Half Tonner, Insatiable had their best day so far, scoring two podium finishes to put the Cornishmen into third in class.

In IRC Four John Twomey’s Sonar, Baileen Ban started the regatta with a disappointing fifth but since then the team has been virtually unstoppable, winning all but one of the five races. Twomey has enjoyed a distinguished Paralympic career and will make a phenomenal tenth Games appearance at London 2012. At the Games in Weymouth, he’ll be at the helm with teammates Ant Hegarty and Ian Costelloe. Finbarr Dorgan from the Cove Sailing club is in second place racing Sonar, No Half Measures and Nyhan & Buwalda’s 707, Outrigger is still very much in contention in third place.

Right now, it is standing room only at the Royal Cork Yacht Club with competitors enjoying a glass in brilliant sunshine. Tonight’s entertainment features a young band from Cork that the New York Times described as ‘the new U2”. The Calvinists will be delivering foot stomping original songs and well-known covers played with heaps of energy on the main stage in the event village.

View all posts by Louay Habib →