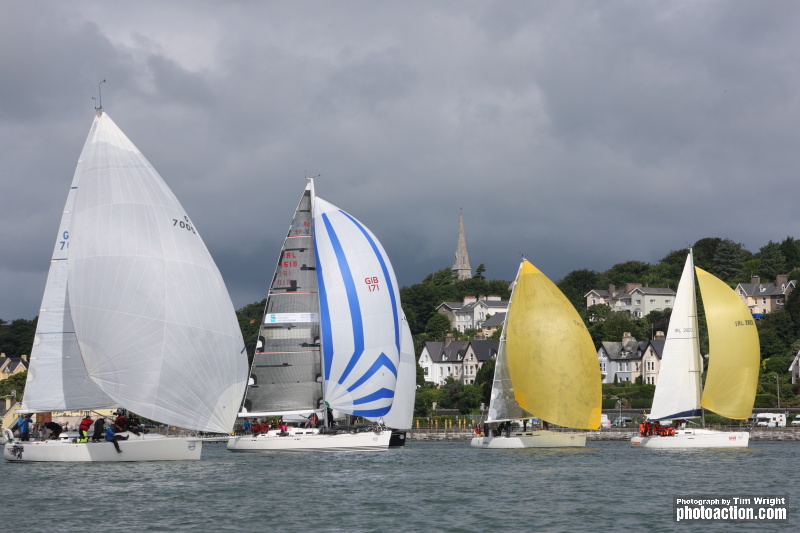 Volvo Cork Week got off to a supersonic start with a fly-by of four PC9 aircraft passing over the start line of the Beaufort Cup fleet, heading for the Fastnet Rock for their offshore race. 13 teams have entered the inaugural international services competition supported by the Irish Defence Forces, with a top prize of 10000 euros to a nominated charity.

For the remainder of the Volvo Cork Week fleet, there was racing on the first day in Cork Harbour and the Atlantic Approaches. A solid 12 knots of breeze from the North decrease during the day but a significant sea state remained for competitors on the Slalom Course and Windward Leeward course south of Roches Point. 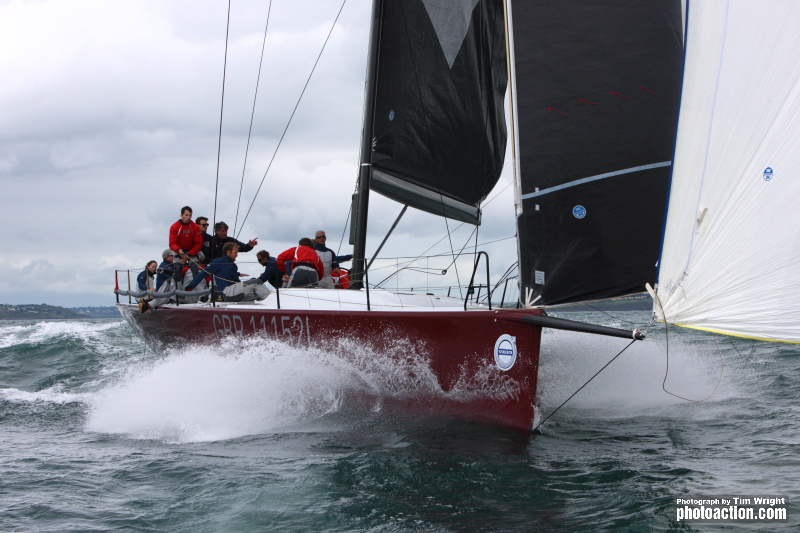 In IRC Zero, three races produced three different winners. Tony Langley’s TP52 Gladiator, with son Bernard taking over the helm, took the first race. However, as the wind subsided for the second, Anthony O’Leary’s Royal Cork team, racing Ker 40 Antix, took the win. Eric De Turckiem’s French A13 Teasing Machine ended the day with a bullet in the last race, to lead the class by a single point from Antix. Gladiator is just two points off the lead in third.

Irish Olympian, Peter O’Leary was calling tactics on Antix. “Gladiator is so fast, we will struggle to be any where near her in tomorrow’s coastal race and Teasing Machine is a reaching machine. All three boats are very different but so are all the different courses for Volvo Cork Week. It is going to be an interesting week.” 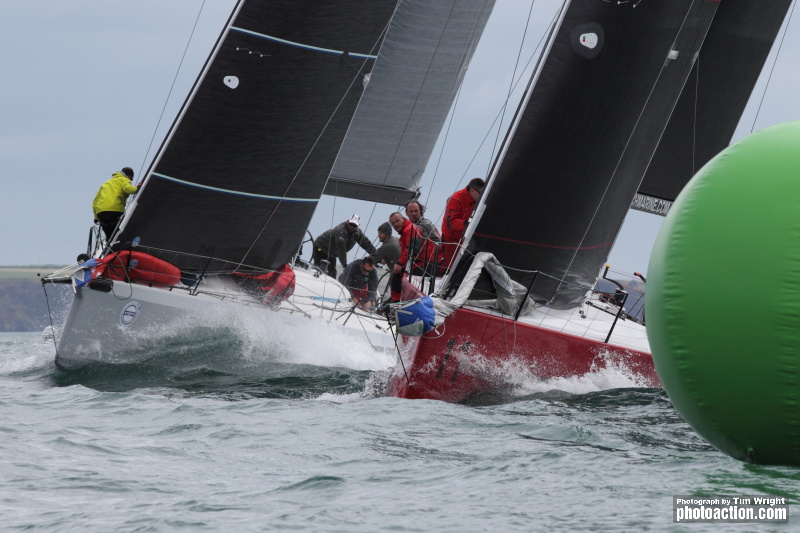 The story of the day has to be Mike Henning’s Alice. Prior to Volvo Cork Week, Mike’s team sailed Mumm 36 Alice over 300 miles to Crosshaven from the Hamble UK but horror of horrors, the boat was badly damaged below the chain plates shortly after arrival. A replacement charter was rapidly sort and Grand Soleil 43 Quokka started the trip from the Uk, only to be turned back by foul weather off Lands End. Royal Cork’s Anthony O’Leary came to the rescue, launching a 1720 for the British team to charter and race in the mixed sportsboat fleet. There were three races today for the fleet and Alice won all three.

“None of the crew have ever sailed a 1720 before and after our bad luck we did not have high expectations today!” smiled Mike Henning. “The Royal Cork have been truly amazing, helping us in every way they could, down to lending us buoyancy aids. I have to admit we did get a few astonished looks from the rest of the fleet, when we won all the races today. I would have thought we have now put a big target on our back and we will be in for some great competition.”

In IRC Two, Paul O’Higgin’s JPK 10.80 Rockabill VI also won all three races on the first day of Volvo Cork Week . However it was far from easy for the Royal Irish YC team, as Paul explains: “I would say we were lucky today, we won the second race by one second and the last race by four seconds. The reaching angles of the slalom course also suits us better than other designs but later in the week the windward leewards may favour others, especially if we have light winds.” 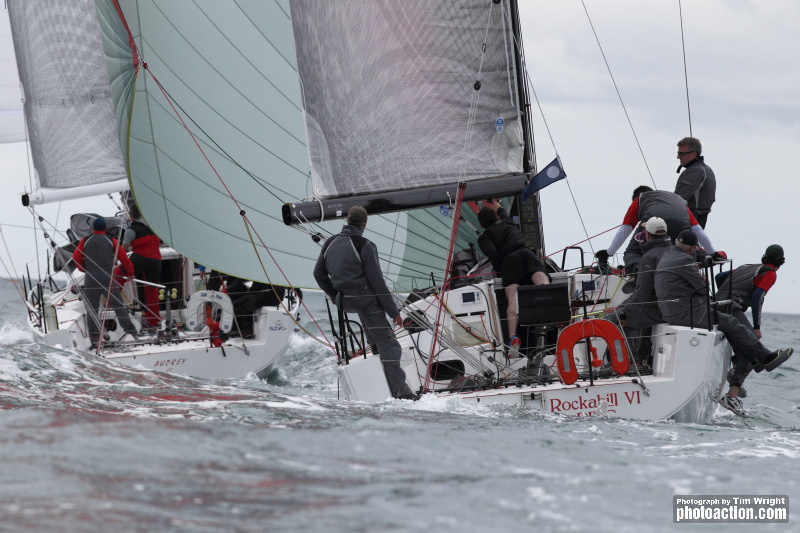 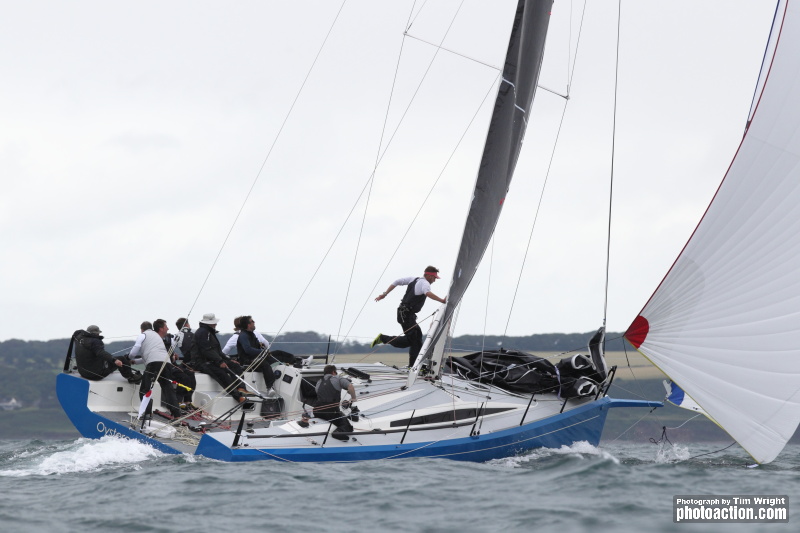 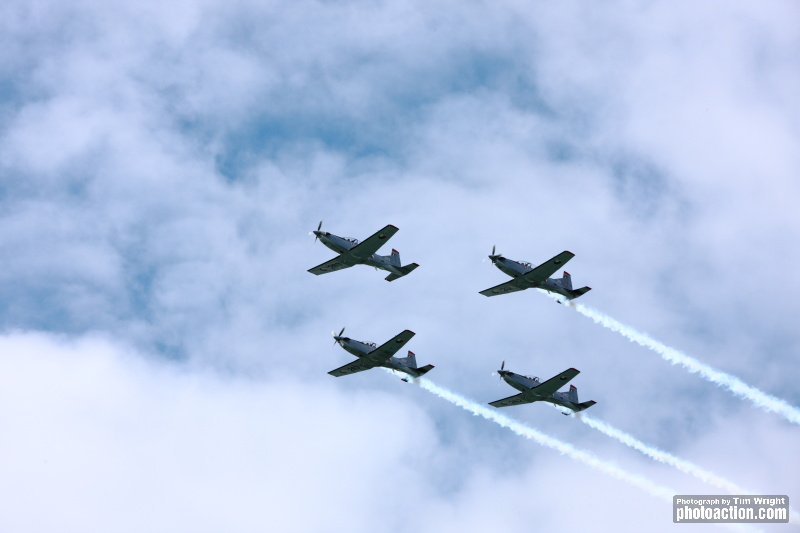 The Royal Cork Yacht Club is buzzing after the first day of racing and competitors have been treated to complimentary Oysters and Murphy’s to wash away the salt excesses of the day. Billy Lynch will be providing live music. Racing continues at Volvo Cork Week tomorrow, the IRC Classes will be taking on the long coastal course with the potential for an eight hour race along the rugged coastline of West Cork.