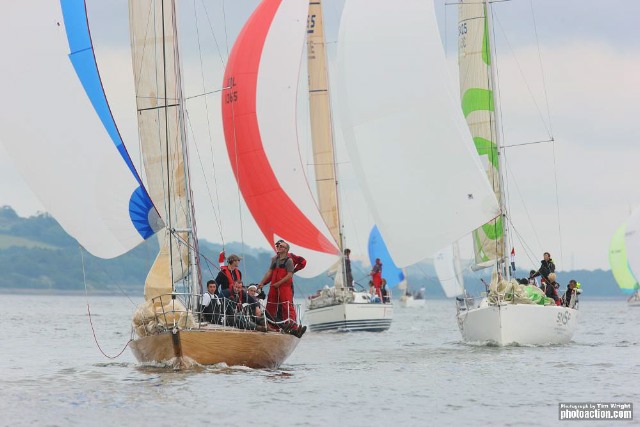 After the first night of partying in the tented village to some wicked sounds from Irish rock band Setmaker, competitors at Cork Week woke up this morning to an eerie Irish mist, enveloping Crosshaven. Curious dolphins were a regular sight on the racecourse popping up next to competing boats, they adding to the ghostly atmosphere.

The fickle breeze was from the southeast but barely rose above ten knots. Starts are always important but especially in light wind. Getting into clear air and not stalling the boat was paramount today.

Johnny Vincent’s Pace continues to impress, winning both of today’s races by a comfortable margin. Tactician Jeremy Robinson has won the Rolex Fastnet Race, Rolex Sydney Hobart and is a former 505 World Champion.

“After a couple of minor errors early on, we sailed well today. It was a good team effort and we got off the line really well which is always important. I do enjoy coming to Cork Week. It has a very different atmosphere to some of the regattas that I compete in and there has always been a lot of laughs in Crosshaven” commented Robinson, after racing.

Pace is out in front after four races, Gray, Laidlaw’s Farr 52, Bob, jumps up to second after a great day out. Stephane Neve’s French TP52, Paprec Recyclage, drops to third spot.

Bernard Lambilliotte’s Swan 45, Nemo of Cowes continued their impressive form, stretching out their lead in a class containing some red hot boats, bound for next month’s Rolex Commodores’ Cup.

“We are delighted with our results, so far” commented main sheet trimmer, Sam Richmond. “Getting into clear air has been pretty much vital. The boats behind us on the water have been mixing it up, slowing each other down a bit. We have a great crew on board but so have the other boats and we are taking nothing for granted.”

Nemo of Cowes are now nine points clear at the top. Dave Dwyer’s Marinerscove.ie had a much better day and is now second with Bernard Gouy’s Ker 39, Inis Mor, helmed by the yacht’s designer Jason Ker, moving up to third.

The second race of the day provided the closest finish in any class on Day Two of Cork Week. The top four boats finished within 30 seconds of each other, after corrected time. This morning four boats were tied at the top; Conor Phelan’s Ker 37, Jump Juice is now just a point in front of Richard Fildes’ Corby 37, Impetuous with Robert Davies Corby 36, Roxy 6 lying third. 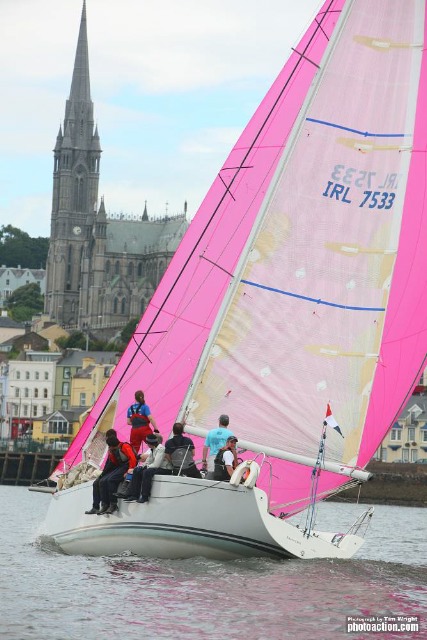 John Moorehead and Chris Ferres’ J 35, Bengal Magic scored their third consecutive win of the regatta during today’s Harbour race. John and Chris have been coming to Cork Week for the last ten years.

“It is a great fun regatta and a lot less stuffy then some,” commented John Moorehead enjoying a pint in the Heineken Bar. “The crew on Bengal Magic come from Bangor, Wales and Kerry in Ireland and we are all good friends enjoying a fine place to come and sail. The Harbour course had very light winds today, so we planned to get clear of the opposition, we got a good start especially as two boats near us decided to have a bit of a match which left the way clear for us.

Ringabella Bay was a decisive part of the race. A lot of boats parked up there but we had plenty of room and the leading boats got away from the rest and extend our lead.”

Co-owner of Bengal Magic, Chris Ferres explains why they love coming to Cork Week. “Back home in Bangor we don’t get fleets as big or as competitive as we do here. So we come to Cork Week to enjoy excellent racing but we enjoy the occasion just as much ashore, it is great that everybody is together, enjoying a few drinks after sailing.”

In IRC Three, Bengal Magic are the overnight leaders with Ross McDonald’s X 332, Equinox second and Dermot Cronin’s J 35, Mumbo in third. These three boats are pulling away from the rest of the 22 strong fleet.

Kirwan is from Dun Laoghaire and has owned Errislannan since 1996 but the boat is over 20 years old.  “There is a lot of elbow grease that goes into keeping her in top condition,” explained Paul Kirwan. “This is the only event that we get to race against other Sigma 38s. Cork Week is a very special occasion for us.

Today’s race was always going to be a tall order for us to win. We give other boats a lot of time and in light airs with many legs, it is difficult to get far enough in front.

However we got a good start, we weighed up the options and decided to go for a spinnaker start at the pin end. The crew have been together for some time and I had every confidence that we could fly the spinnaker. We got away well and sailed a good race, perhaps we will fair better on the slalom course, where crew work becomes much more important.”

Vincent O’Shea’s Corby 25, YANKS $ FFRANCS looks unstoppable in the class with a perfect score line they have opened up a gap of seven points from Denis Coleman’s Corby 25, Thunderbird. John Allen’s X 302, Antix is third. Cork Week Chairman, Peter Deasy co-owner of Jeanneau Sunfast 32, Bad Company, had another consistent day, to move up to fourth place just ahead of a pack of boats.

Royal Cork Yacht Club Quarter Tonner, Tiger, owned by James O’Brien, Kenefick & Kenefick, scored yet another two bullets today making it four in a row, to stamp their authority on the class. Flor O’Driscoll’s J 24, Hard on Port are still in second place and Clem McElligott’s Sigma 33, Sea Hawk had a very good day on the water, scoring two podium finishes, to move up to third.

Greg Burgess’ Blue Jay is now the leader after posting a second and a first on the Slalom Course today. Robert O’Leary’s Jeroboam drops to second and Brian Moreton’s Juke Box had an excellent day claiming third overall. The racing in the fleet is incredibly close but the top three have opened up an eight point gap, in the eighteen strong class. However in a no-discard series, nothing is likely to be decided until the last race.

Michael Wilson’s 1720, YKnot continued to shine with a bullet and a second to produce a narrow lead at the top. Bryan Hassett’s 1720, Dark Side has dropped to third place and has been over taken by Denis Murphy’s Aquatack who scored their first win at Cork Week, in the last race of the day.

White Sail One and Two

Philip Dilworth’s Grand Soleil 40, Orna is still top of the leader board in White Sail One but Kevin Lane’s Dufour 40, Aisha proved they are not invincible, taking the gun on the last race of the day by 44 seconds on corrected time. Dan O’Neill’s IMX 38, Xerxes are still in third place.

McCarthy, Clarke & McMullin’s Half Tonner, Harmony should be in a good mood tonight, scoring two bullets propelling them five points clear of the field. Billy Duane’s Sunlight 30, Expression managed two second places which lifts them up to second in the series. Tom McNeice’s Sigma 33, Minx III were joint leaders this morni 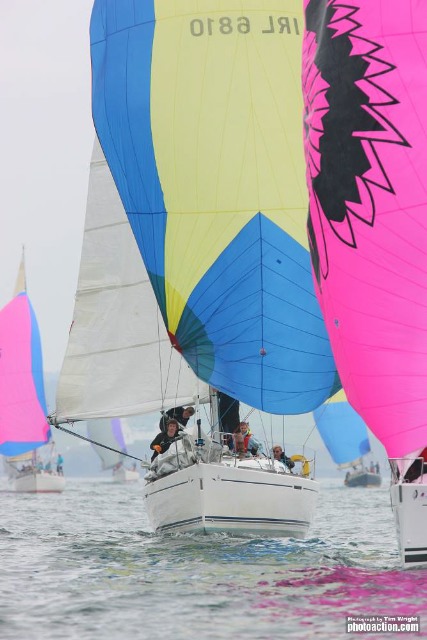 ng but now drop to third.

Tonight, The Marvels are in town! Composed of some of Ireland’s finest session musicians, they don’t do empty dance floors. They will be performing live in the main regatta beer tent at Cork Week.  Racing resumes tomorrow for all classes with the first warning signal just before 1100. 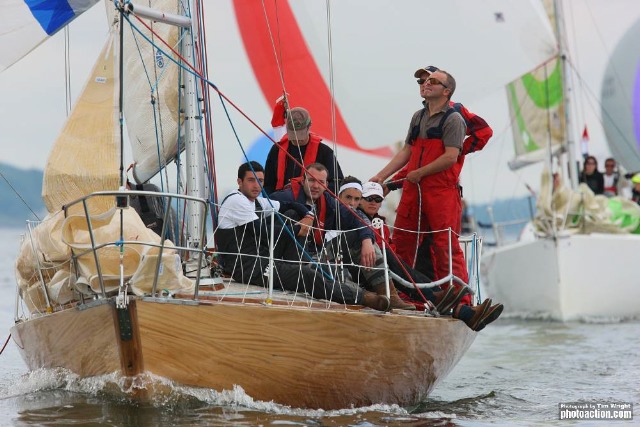 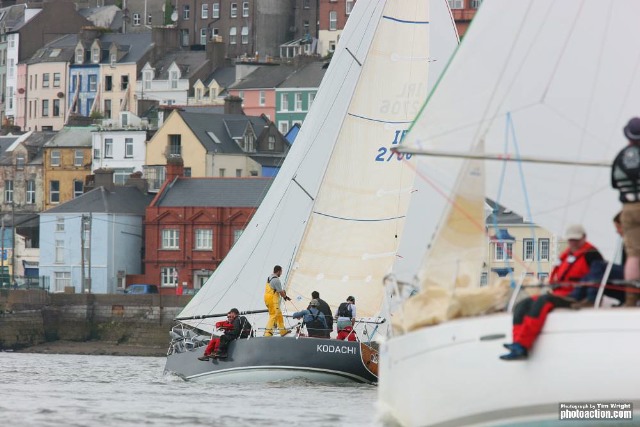 The secret of Cork Week’s success cannot be attributed to any one rule or aspect of it’s organisation. It’s success is found in the eclectic mix of classes, competitors, good courses, good company, our team of dedicated volunteers and the good humour of our 10,000 visitors.
View all posts by admin →
Costa del Cork
Rock and Roll!