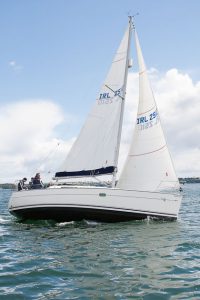 This year at Volvo Cork Week we have a large entry list of Non-Spinnaker boats as well as the all-new coastal and two-handed fleets, which are proving to be very popular at all major regattas across Europe. The race organizers have tasked Course Race Officer Peter Crowley with the responsibility of specifically designing courses to suit the needs of the non-spinnaker and coastal fleets.

It promises to be a great improvement on years of old when non-spinnaker was confined to sailing courses designed for boats with spinnakers.

The coastal courses will allow boats that would normally be out classed or out crewed by some of the more modern and high performance boats, to race against like-minded sailors. This will provide a more relaxed environment, without taking away from the quality of the racing and lay a great foundation for some two handed sailing in the all-new two-handed class.

It is not often that sailors can get together and race in one large area over four great days with sailors from all over the country and top class entertainment ashore.