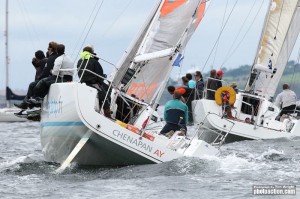 A shifty northwesterly breeze of between 8-12 knots provided a gentle but tricky start to racing for the international fleet at Cork Week. The tight Olympic and Trapezoid courses provided some close encounters, with plenty of close boat on boat action. However, reading the subtle changes in the wind direction was vital to success. As the day progressed the wind became less stable with a fresh front arriving later in the afternoon, giving a damp finish to a day of hot racing.

In IRC One the day was emphatically won by Richard Fildes’ Corby 37, Impetuous, which won both of today’s races. Richard sails out of Abersoch, Wales and is a veteran of Cork Week.

“I have been coming here since 1979 and this is my 12th trip on the trot but I have to say that is the best day I have ever had here!” Laughed Richard. “Great competition on the water and I have to admit to getting a thick slice of luck. Inga of Sweden was going so well in the first race but got slowed down by a boat in another class, which definitely helped us and in the second race, I have to admit we were late to the restart and crossed at the Committee boat by chance rather than judgement and plugged into a really useful shift, which really made the win.”

In the 1720 Class, Jane McLelland’s Girls Antix, with Libby Greenhalgh at the helm, won the first race of the day and after two races the girl’s team are level on points with Denis Murphy’s Aquatack. Jane is the mother or two young children that are back home in London with their father. “Well what a fantastic day!” Smiled Jane. “The decisive moment in the first race came when we saw that the leading boats were slowing down in a luffing match and we managed to sail around them. But I have to say it was a totally unexpected win, I haven’t been out racing for ages and we are all a bit rusty but what a great way to start Cork Week!”

In IRC Three, Peter Deasy, Admiral of the Royal Cork Yacht Club took the win in the only race of the day with his Sunfast 32, Bad Company. “We didn’t have the best start but we spotted a shift and made an early tack onto it, which proved decisive.” Commented Deasy. “But we were made well aware of some great sailors in this class, especially Dermot Foley’s Anchor Challenge. We will have a glass in the club tonight but we will be keeping our powder dry for another battle tomorrow.”

Local weather expert, Eddie English believes that conditions for tomorrow’s racing may be fairly similar to today with perhaps a slight shift to NNW with maybe a knot or two more pressure. Tonight, the blue touch paper will be set a blaze by Cork Week’s headline act. Ska Rock band, Pontious Pilate & the Nail Drivers, who will deliver a high energy set on the main stage … bring your dancing shoes!

View all posts by Louay Habib →