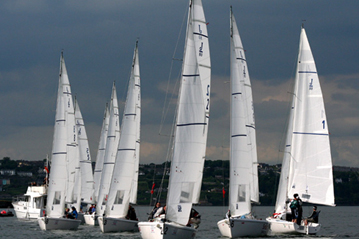 The Inaugural Invitational Series was raced today as the first series of races in ACCBank Cork Week.  This Series was held in association with the ISA Sailfleet Programme.  Competitors raced in 8 identical one design keelboats – J80`s.

The Principal Race Officer was Peter Crowley with Geoff Myburgh and David Lees acting as on the water umpires.  Briefing was held at 930 hrs and first gun was at 1130 hrs.  All Competitors were delighted with the three races sailed as conditions proved to be extremely challenging given major wind shifts.  The Race Officer did a great job in difficult conditions.

2nd Place  Peter O`Leary, Royal Cork Yacht Club Member who has just flown back from Beijing where he is training for the upcoming Olympics in the STAR Class.

The secret of Cork Week’s success cannot be attributed to any one rule or aspect of it’s organisation. It’s success is found in the eclectic mix of classes, competitors, good courses, good company, our team of dedicated volunteers and the good humour of our 10,000 visitors.
View all posts by admin →
ISAF Classification
International Rescue