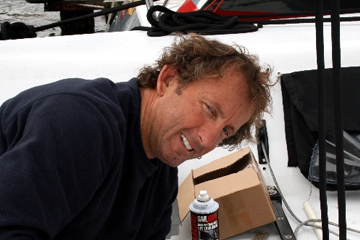 Led Pritchard is quite a character, he is racing at ACCBank Cork Week on a Farr 45 called “International Rescue” with a crew of mates, including Tufty, Chopper, Laptop, Barnie and Sharnie.  Led is a well known figure at regattas and boat yards around the world.  Originally from Mumbles in Wales, he is very proud of his roots but does have a soft spot for Crosshaven, as he explains.

“Excuse me for not getting up but I have a pocket full of ball bearings here!” explained Pritchard, in the usual position of lying awkwardly, on a boat, fixing a problem.

Led Pritchard came here for the very first Cork Week in 1978 and this will be his 14th.  He has missed two but had a good excuse; he was competing in Hawaii, at the prestigious Kenwood Cup.

“The first year I was here, there was a feeder race from Jersey, we beat to get here in a gale 9.  I was a Trapper 400 called “Beserka” owned by Brian Case and it was a small event; there were no beer tents just the Yacht Club.  Six of us slept on board, for the week, and it was a four berth boat.  I keep coming back because they gave me a RCYC tie and made me a member and I feel obliged to honour it.  I have made a tremendous amount of friends here.”

Pritchard started professional sailing in 1982 when he did a delivery trip from Crosshaven to Sardinia on a flush deck Holland 42 called “Wee Willy Winky” and since then he has sailed and maintained some of the most well known boats in the world but this week, Led is here sailing with some of his closest friends.

“I am out here with my best mates” explains Led.  “That’s Sarah Goddard-Jones on the bow, I have known her since she was a very small girl and she’s here with her boyfriend Pete.  I sailed here with Sarah’s Dad in 1982 and `84 and we enjoy the event, on and off the water.”

Led is competing in a Farr 45, one of ten here at ACCBank Cork Week and the boat’s owner Geoff Tracy has lent it to Led for the week.  The Farr 45 is capable of speeds in excess of 25 knots and the racing between the fleet is extremely tight, Led decided to rename the boat, “International Rescue” for the regatta and explains why.

“It is a nickname I have picked up, helping out on boats just about any where in the world over the past thirty years.  You phone “International Rescue” and we will be there in 20 minutes!”

But it took a bit longer than that for Led and his crew to sail the boat to Crosshaven from Hamble in the UK.  In an eventful trip, they had a steering problem causing Pritchard to spend his 50th birthday in the middle of the Irish Sea.  Upon arrival, Led Pritchard’s army of friends gave him a warm welcome that only the craic at ACCBank Cork Week can provide.

The secret of Cork Week’s success cannot be attributed to any one rule or aspect of it’s organisation. It’s success is found in the eclectic mix of classes, competitors, good courses, good company, our team of dedicated volunteers and the good humour of our 10,000 visitors.
View all posts by admin →
Invitational Series held 12th July in ISA Sailfleet J80`s
Looks as good as she goes