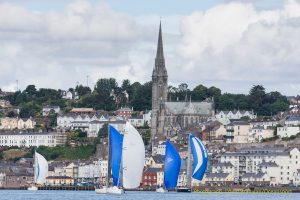 The leading boats in the Beaufort Cup Fastnet Race for military and rescue service crews on the opening day of racing
Photograph: David Branigan/Oceansport

A mixture of clear blue skies and blankets of clouds made for highly changeable conditions for the first day of Volvo Cork Week. Thankfully the warm sunshine won the day, providing light air racing in beautiful Cork Harbour and the Celtic Sea. The teams returned to the dock with colour in their cheeks, a glint in the eye, and a thirst for the refreshments at the Royal Cork Yacht Club. 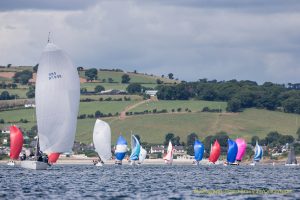 Mojito (left) owned by Peter Dunlop and Vicky Cox from Pwllheli in Wales pictured of Fountainstown on the opening day of racing.Photograph: David Branigan/Oceansport

Racing kicked off with an early start for the 17 teams racing in The Beaufort Cup, which set off on a 150-mile offshore race from Cork Harbour, bound for the Fastnet Rock and back to the finish. After a fly-by from the Irish Air Force, the Baltimore RNLI team, skippered by Andrew Algeo, and the Irish Defence Force team, led by Barry Byrne, got away to a great start with the duo leading the fleet past the iconic town of Cobh. However, it was Simon Coveney’s Irish Defence Force team that led out of Cork Harbour and away along the south coast of Ireland. The fleet will be on the wind for the first night, and expected to make the Fastnet Rock in the early hours of Tuesday 17th July.

The Volvo Cork Week Armada were out in action off Weaver’s Point for an inshore race with a top mark in the picturesque Ringabella Bay. A light breeze from the southwest, and a building tide, made for a tricky start.

In IRC One, Frank Whelan’s Grand Soleil 44 Eleuthera (Greystones Sailing Club) got the best start to lead the fleet on the beat along the shore. However, on the return to Weaver’s Point the breeze started to fade and the lower IRC rated boats made up their time. Jay Colville’s First 40 Forty Licks (East Down YC) won the race in IRC One by just 26 seconds on corrected time from Jonathan Anderson’s J/122 El Gran Senor (Clyde Cruising Club). Performance Yacht Charter’s Grand Soleil 43 Jua Kali (RORC) was third. 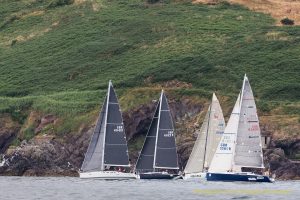 “Never give up, that’s the motto on Forty Licks.” commented Jay Colville. “We didn’t make too many mistakes today, and we are good at spotting the new breeze. We came from behind with the wind, but we are very happy because we sailed well. This is my sixth Cork Week in total, and the last three Volvo Cork Week’s on the go. We keep coming back because it is a lovely place to sail and it is competitive, recently at regattas we have had loads of seconds, so we would love to win this one.” 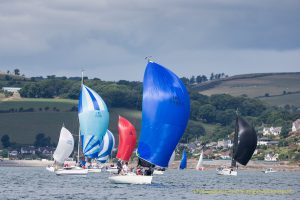 Volvo Cork Week continues tomorrow Tuesday 17th July with racing from 1100 inside and outside of Cork Harbour. For all the stories, pictures and videos from Volvo Cork Week like our Facebook page https://www.facebook.com/VolvoCorkWeek/
For race documents, results and event guides: www.corkweek.ie