ISORA Race Week was hosted by the Royal Cork Yacht Club in 1976 and its success led to the club deciding to host its own biennial regatta.

The first Cork Week took place off Cork Harbour in 1978. From small beginnings with just over 50 boats, the event prospered through the enthusiastic endeavours of volunteer club members.

It was during 1985 that John McWilliam, Grattan Roberts, Joxer O’Brien and Donal McClement who each had vast experience of Offshore Racing and World Championship Events realised that the Sport was being taken over by the so called ‘Rock Stars’. Owners were beginning to complain that they could no longer compete against their friends as the ‘Arms Race’ had well and truly begun.

The development of the IOR Rule also meant that the boats were becoming more and more extreme in regard to lightness of construction and tenderness to get maximum Rating advantage. The fact that you had to pack the windward rail with Super Heavyweights if you wanted to win anything was also of great concern.

Peter Whipp the Owner of “Panda” which won the Fastnet in 1985 was quoted, after the race, saying that he was getting out of this type of boat where he had to sit on the rail for 4 days and nights during the Fastnet. 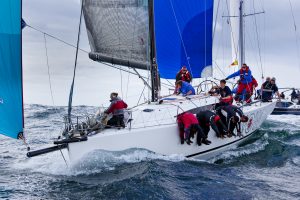 George’s Sisk’s WOW surfs along the swell in the final day of racing at Cork Week 2010 in Crosshaven.
Photograph: David Branigan/Oceansport

The Gang of Four

The ‘Gang of Four’ came up with the idea that we should run an Event where the ‘Rock Stars’ were not welcome and after several months of deliberation they wrote a Rule that was to become the single most important reason as to why Cork Week became the success that it is today. This Rule became the basis of what is now the International standard for Crew Classification and became part of the Racing Rules of Sailing in 2001.

The Rule stated “Anyone whose financial well being was directly affected by Race Results and whose presence on a boat significantly improved the performance of that boat” was not eligible to race at Cork Week.

Owners were required to get clearance from the Organising Committee for any Crew Member who they thought might not be eligible and this system worked pretty well until 1996. 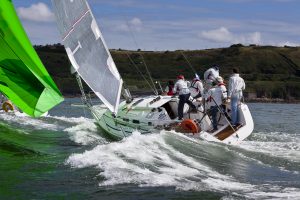 Jelly Baby at the start of the Harbour Course at Cork Week 2010 in Crosshaven. Photograph: David Branigan/Oceansport

Beamish & Crawford, using the Carling Brand, were the first Sponsors of the New Cork Week in 1986 and the Event incorporated what we called the Carling European Offshore Team Championships for Teams of 3 boats within the Regatta. A total of 86 entries were received and the general consensus was that we had a winner on our hands. The Owners liked the fact that they could helm their own boats against their friends and did not have to take orders from a ‘Rock Star’.

Heineken came on board for 1988, with the same format, and it became the Heineken European Offshore Team Championships. Entries topped the 100 mark and again we had a really good Event. Other than Donal McClement the other members of the ‘Gang of Four’ took a back seat after 1988.

We were absolutely sure we had hit the spot by this time and felt the Event could be developed into a really major Regatta. For this we needed considerably more Sponsorship and, thanks to the late Jim Collins (Admiral at that time), Henry Ford & Son came on board as the Title Sponsor, the Event was re-branded as Ford Week and Clayton Love came onboard as the Event Chairman.

The long association with Ford ended after 2002 and the event continued successfully through 2004 and 2006 with the latter earning particular praise for the quality of its race management throughout. Like all experienced race officials, those involved paid homage to the weather gods who obliged with a steady pattern of breeze throughout the week. ACC Bank came on board as the Title sponsor for the 2008 Event, in 2010 and 2012 entries declined slightly but 2014, 2016 & 2018 saw an increase with the arrival of Volvo Cars Ireland as the new Title sponsor of the event.

Volvo have been the title sponsor since 2014

The entries flooded in for 1990 and when we surpassed 200. The idea to split the boats into different Fleets was developed and with a final tally of about 225 boats we raced with three different Fleets. We were also very innovative with regard to Courses and, believe it or not, we were the first Regatta in the World to use a Windward / Leeward Course. The idea of Tent City was also developed for 1990 and that has grown to what we know today. Again a really successful Event both afloat and ashore and a healthy surplus boosted Club funds. Our Eligibility Rule was now well accepted by all and we started the idea of a post Regatta Questionnaire that was sent to all Owners. The response was superb and we were able to listen and improve as a result of positive feedback.

1992 saw another huge increase in the entries to about 350 boats but the Fleet system worked perfectly with 5 different Racecourses.

1994 when both Britain and Ireland were in the throes of a mini recession saw the entries stabilise and the regatta was once again a real success. The Formula was well established. The Competitors loved the idea of having such varied racing and it was also the first year that we began to attract some really big boats such as “Pyewacket” owned and sailed by Roy Disney.

1996 saw a big jump again with about 480 entries and the Event had now become the premier Regatta in Europe Fords were still the Sponsors and it was after this week that they finally agreed to Brand the Event as FORD CORK WEEK.

1998 saw entries exceed 600 with the 1720 European Championship being part of the event and 66 One-Design boats on the starting line. This was particularly satisfying for many of the club members who were involved in both the design concept of the boat as well as the Regatta organisation. Large One-Design fleets continued to be attracted to Crosshaven and in 2000 we hosted 83 Sigma 33’s for their British and Irish Championships amidst and over all entry in excess of 600 boats. 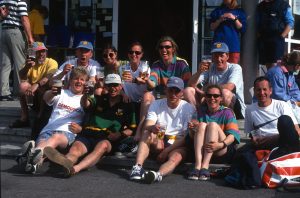 The Beaufort Cup commenced in 2016 and runs in conjunction with Cork Week. It is an International Inter Service Sailing Regatta open to the Navy, Coast Guard, Army, Airforce, Police and other Rescue Services. The winning crew take home the specially commissioned trophy in honour of Sir Francis Beaufort, creator of the Beaufort Scale and €10,000 to be donated to a charity of their choice. The week long event includes an Offshore Race which sees crews race from the home of the Irish Naval Service, Haulbowline Island, to the Fastnet Rock and back to Cork Harbour. This is then followed by three exhilarating days of inshore racing concluding on the Friday. 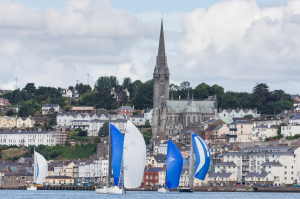 The leading boats in the Beaufort Cup Fastnet Race for military and rescue service crews on the opening day of racing at Volvo Cork Week 2018 organised by the Royal Cork Yacht Club..Photograph: David Branigan/Oceansport

Heading into 2020, the 22nd edition of Cork Week, Volvo Cars Ireland came on board again as the Title sponsor and the event was on course to reach 300 boats as a mark of the club’s Tricentennial celebrations. Members and visitors alike were hugely looking forward to coming to Cork to celebrate in style and event was shaping up as one to rival the peak years of the late 90’s early 00’s. Unfortunately, the event was cancelled as a result of COVID-19 pandemic and it wasn’t possible to reschedule. 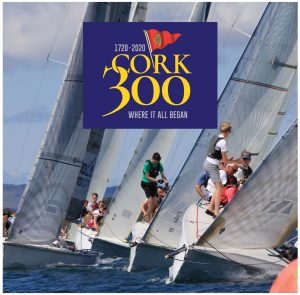 The 1720 fleet was expected to draw 50 boats for their Europeans in 2020. Photograph: Deidre Horgan

The 23rd edition of Cork Week will mark an elongated celebration of the club’s Tricentenery and is a great opportunity for visiting boats to come and join in the celebrations of the oldest yacht club in the World. We are again aiming for 300 boats in 2022. The secret of Cork Week’s success cannot be attributed to any one rule or aspect of it’s organisation. It’s success is found in the eclectic mix of classes, competitors, good courses, good company, our team of dedicated volunteers and the good humour of our thousands of visitors. 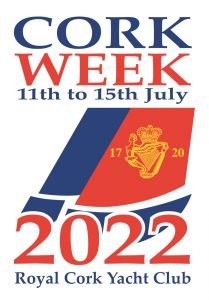