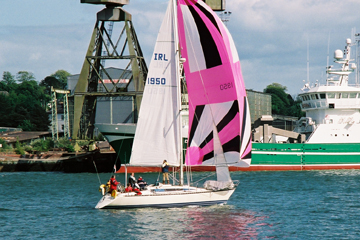 While we are all delighted to see the big fast boats returning year after year to compete in Cork Week, we are equally delighted to see that we will have a strong fleet of Whitesail/Gentleman sailors participate again at this year’s Event.

One of our early entries this year is a former Admiral of the Royal Cork Yacht Club – Conor O’Donovan who will be competing in his X 372 “X-TENSION”.

Conor took a rest from competing in the 2006 and 2008 events, but apart from those two events he has competed in all Cork Week’s in various classes since it’s inception in 1978.

He was attracted to the whitesail fleet this year, not alone because it gives him the opportunity to get back to racing, but the fact that he can have family and friends on board and still be able to compete.

Conor will be joined by his wife Brenda and no doubt several of his children and grandchildren during the week.  So to all you whitesail sailors out there – get your entries in early and give him a run for his money!!!!!

The secret of Cork Week’s success cannot be attributed to any one rule or aspect of it’s organisation. It’s success is found in the eclectic mix of classes, competitors, good courses, good company, our team of dedicated volunteers and the good humour of our 10,000 visitors.
View all posts by admin →
Have you got your entry in?
Sigma 38 Europeans to be held at Cork Week