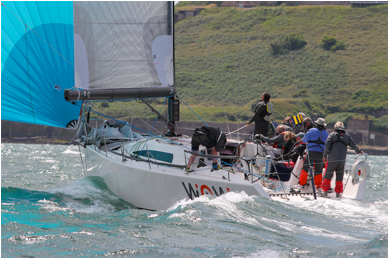 Sailors are encouraged to enter Volvo Cork Week 2016 (10th – 15th July) before the early-bird deadline on 1st May for a chance to avail of a discounted entry price, as well as being entered into a draw to win a weekend bareboat charter on a 40ft yacht, kindly sponsored by Sovereign Sailing in Co. Cork.

Including the one design 1720 and Viper Sportsboats, a wide variety of boats have already entered Volvo Cork Week, with a significantly higher number of early entries compared to this time in 2014. As well as hosting the Inaugural European Championships and the Beaufort Cup, Volvo Cork Week are putting a big effort into building the Coastal fleet, with an early entry from George Sisk’s Farr 42 WOW (Winner of the Coastal Division in Volvo Dun Laoghaire Regatta 2015 and ICRA boat of the Year 2015). “We had great sailing in the Dun Laoghaire Volvo Regatta last year when we chose to sail on the ‘coastal fleet’ we reminded ourselves there is more to yacht racing than ‘sprints’” said George “Cork harbour and the near coast are beautiful to sail in, the variety of wind direction and radial flow add new dimensions and skill sets for crews when sailing coastal courses, without the necessary but frustrating stops between races.”

The coastal fleet is a fantastic opportunity for boats that wish to partake in the event and do not want to be in the mix with all the high performance racing boats or have to get a full crew of experienced sailors in order of have a chance of winning their class. With a Corinthian spirit the coastal fleet will be longer races with a lot more variety and types of boats, aimed at providing good fun racing for those competing in that fleet.

Based on competitors feedback from previous events, Kieran O’Connell, Chairman of Volvo Cork Week, initiated innovative changes to this year’s event. “We have been making a big effort to keep the cost down for participants. We have set guide prices for local accommodation in Crosshaven and will also provide camping options, with toilet and shower facilities. We are looking at all options to keep other costs affordable.”

Helly Hansen, Volvo Cork Week’s Official Clothing Partner, will have a retail shop in the regatta village, alongside other notable retailers such as CH Marine and Union Chandlery.