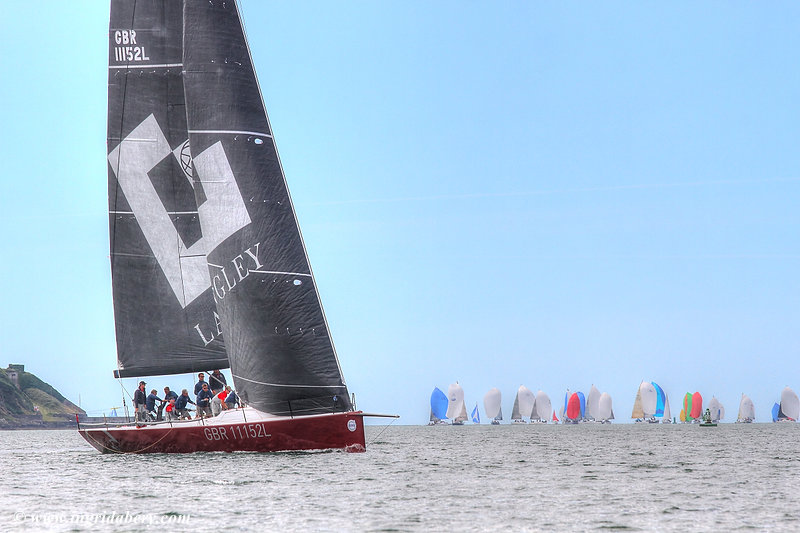 One hundreds yachts, of all shapes and sizes, graced Cork Harbour on the fourth day of Cork Week. The weather lived up to the spectacular location with bright sunshine bathing the course for most of the day. Tony Langley’s TP52 Gladiator romped around the course in under two hours to take line honours but after time correction Eric De Turckiem’s Teasing Machine was the winner of IRC Zero. Towards the end of the race, fresh breeze favoured the smaller yachts, and the overall results after IRC correction favoured the pocket rockets. 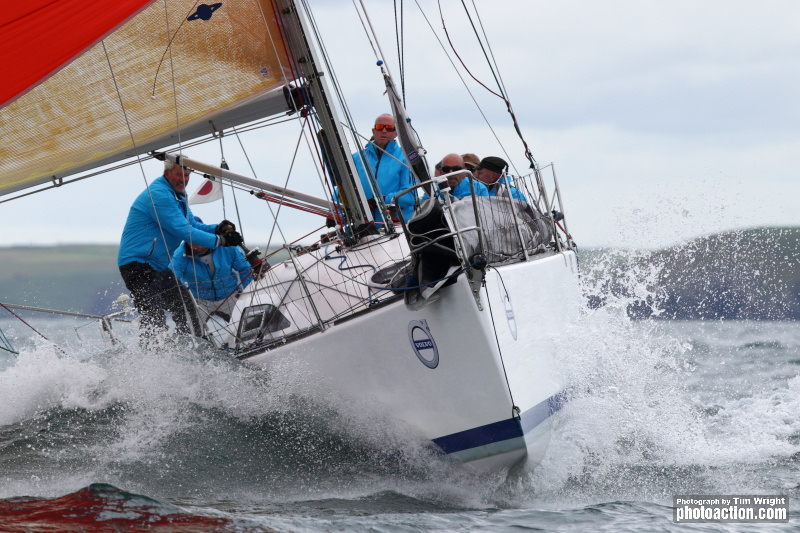 “We got a good start which was crucial in such a big fleet, clear air on the short beat and room at the top mark was the early goal.” commented Charlie Frieze.  “Once we were inside the harbour we were able to run a symmetrical spinnaker in the light air, whilst others had to sail greater distances to keep their asymmetric spinnakers filled. In the later part of the race the breeze built, which helped us punch through the negative tide.”

Prime Suspect will be awarded the coveted Hugh Coveney Trophy on Friday at the Final Prize Giving. Richard Matthews’ Oystercatcher XXXI was second overall and John Swan’s Harmony was third.

In IRC Three, John Swan’s Half Tonner Harmony was the winner. The team from Howth are now firm favourites to win IRC Three having won six out of eight races. For the Harbour Race, Paul & Deirdre Tingle’s Alpaca was second and Patrick Farcy’s Cavok was third.

The winner of The Harbour Race for Coastal Fleet One was Nick Ogden’s Ulula. Sheila & James Tyrrell’s Aquelina was second by just seven seconds. George Sisk’s Farr 42 Wow was third for the Harbour race but retains the class lead. Martin Breen’s Dehler 37 Port of Galway is dominating the Coastal Fleet 2 Class, scoring their third win today. 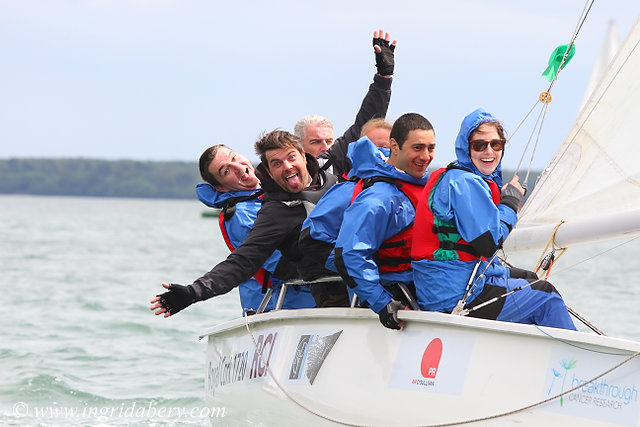 The inaugural ISA Try Sailing Invitational is part of Volvo Cork Week. The initiative aims at introducing as many people as possible to the joys of sailing. Racing in 1720 sports boats, the teams  enjoyed the atmosphere and adrenalin rush of The Harbour Race.

“To think that a few months ago, none of these people had ever sailed a boat before, they have come a long way.” commented Voxpro’s Donal Hegarty, winner of the Harbour Race. “Sailing is a great way to get people together and our company is also using the initiative to raise money for charity. The new sailors showed how far they had come today, the chat was about tide and shifts and for them to come and race at one of the world’s best know regattas, had them star gazing.”

Racing at Volvo Cork Week, incorporating the IRC European Championship, concludes tomorrow with up to three races scheduled. Tomorrow night the first IRC European Champion will be crowned. Tonight’s party at the Royal Cork Yacht Club and the atmosphere will be charged up by music from international band, Big Generator.