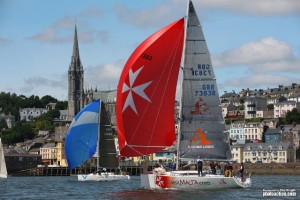 With less than four months to go,competitors are relishing the thought of returning to Crosshaven for Cork Week in July. The Royal Cork, is getting ready for the big event and the club is in great shape, as Cork Week Chairman, Pat Lyons explains:

“The club and our marina are in excellent condition and this was confirmed in February by the award of a 5 Gold Anchor Marina by The Yacht Harbour Association in conjunction with the RYA. The Royal Cork is the first Yacht Club in Ireland to be awarded this prestigious title and it is a fine assessment of the fantastic efforts of all the staff. We are delighted to have been awarded this impressive title prior to Cork Week 2012, so all our competitors can enjoy a top level of facilities and services this July.”

Entries for Cork Week 2012 are gathering pace. Besides a large contingent of Irish boats, many yachts travel from far and wide to Crosshaven for the regatta.

Sailing Logic’s Reflex 38, Tim Thubron will skipper “Visit Malta Puma”, the Hamble based sailor had a great start to the year with a class winning performance in the RORC Caribbean 600.

“Well, Cork Week is one of the biggest events in the yachting calendar and ‘Visit Malta Puma’ had a huge amount of fun last time round. This will be my sixth Cork Week, it’s an occasion I have always looked forward to,” enthused Thubron.

“The courses are challenging and have great variety including the Harbour Course, which always throws up a few surprises. It’s nice to have a different and equally challenging course everyday, it just makes it a proper regatta really. I am sure we will have some very competitive racing, in 2010 we narrowly missed out on a big class win to ‘Rockabill V’ and this year, we expect some exciting action, not only with Irish boats, but from other countries as well. After racing, the event village is full of old sailing friends and it’s great to catch up and have a pint with those guys and chat about the day’s racing.

Lots of regattas have tag lines but Cork Week really is – run by sailors for sailors – the hospitality from the Yacht Club, local pubs and restaurants, is unmatched. Cork Week is a tribute to the whole community in Crosshaven.”

The J/109 Class will be holding the Irish National Championships at Cork Week, Greg Burgess’ Welsh J/109 “Bluejay” will be back to defend their dramatic last race win in 2010 and a large contingent from Dublin are also expected. Former Irish J/109 Class Captain, John Maybury and skipper of “Joker” has hopes for great occasion.

“Cork Week was chosen for our National Championship because it is the regatta with the highest profile in our calendar and we hope for a big turn out”, commented John Maybury. “It is important to stress that the event is open to all nationalities, not just the Irish fleet. In 2010 there were 18 J/109s at Cork Week and it would be fantastic to see a similar number this year. We have 15 J/109s that race on a regular basis in Ireland and we hope to have visitors from overseas to swell that number. The racing will be extremely competitive and once ashore, there are a huge variety of facilities. The Royal Cork Yacht Club, the race village, the restaurants and the pubs provide everything from simple fayre to gourmet cuisine, it is going to be an event not to be missed – great racing with a fantastic atmosphere.”

On something of a ‘busman’s holiday’, Gael Pawson, Editor of Yachts & Yachting magazine, will be racing at Cork Week on Neil Thomas’ Prima 38, “Mighty Max 2”, which will be sailing to Cork from Liverpool.

“Cork Week is a fabulous event and I’ve always really enjoyed it but for some reason for the last few years I have been quite busy and I just haven’t managed to fit it in,” said Gael. “This year I just thought I needed to make an extra effort because it’s just been too long without racing in Ireland. In the past I have raced in one design and sportsboats at Cork, so I have never raced on the harbour course. I can’t wait to get back to Crosshaven and finally get the grand tour of Cork Harbour.

What I really like about Cork Week is that there is serious racing with high level people as well as sailors there just for the fun of it. But everybody ashore takes a bit of time to have a giggle; the regatta is a good blend of laughter and serious sailing. One of the strengths of Cork Week is the range of music in the evenings, you can move around and really enjoy the night, not just standing around drinking but you can have a bit of a dance as well, I like that mixture.”

In recent years, the Quarter Tonner Class has enjoyed a renaissance and, as such, a separate class looks likely for Cork Week. Cork Week Racing Chairman, Anthony O’Leary, explains the reason: “We are delighted that Cork Week will be attracting a number of Quarter Tonners but we feel that as these yachts have been extensively optimized, other yachts racing in Class IRC 6 should be treated separately, hence there will be a prize for the best yacht in the class excluding them and another for the best Quarter Tonner.”

Ian Travers from Kinsale has been very much part of the revival of the Quarter Ton Class in Ireland: “I know of at least five other Irish Quarter Tonners that are going to be competing at Cork Week and I wouldn’t miss it for the world. Especially as this year, I will be racing ‘Per Una’. Eamonn Rohan and I bought her and she has great pedigree, pity about the owners!”, joked Ian.

“I would say the local favourite ‘Tiger’ will be the one to beat but all the QTs in Ireland would dearly love to see some of the UK boats come over for the craic. I can assure you they would get a good battle on the water and some lively evening entertainment!”

The first Cork Week took place in 1978 and since then people from across the world return time after time to experience a truly unique regatta. There’s the fantastic variety of courses, the picturesque setting and the legendary shore side entertainment but Cork Week has a sprinkle of magic that can only really be understood by those who come to Crosshaven and enjoy the full hospitality of the Royal Cork Yacht Club.