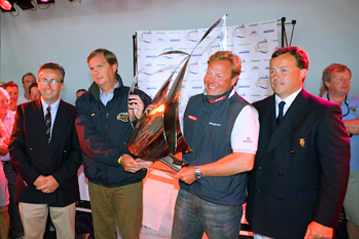 Champagne sailing conditions returned to ACCBank Cork Week for Friday’s finale that saw South Africans Dave and Roger Hudson collect the overall Boat of the Week trophy for their win in the 40-strong Laser SB3 event.

Dave Hudson runs a Sailing School in Cape Town and is a veteran Fireball sailor who only recently turned his hand to the Laser SB3.  The class will hold its first World Championship in Ireland later this year when 150 boats are expected on Dublin Bay.

In addition to the 26 class winners, trophies were also awarded to Jonathan Anderson’s Playing FT$E who received the inaugural Sisk Group Corinthian Cup in Class Zero while Niklas Zennstrom’s Ran won the Carroll Cup for his win of the TP52 class.  Agne Nilsson’s Fortis Excel was awarded the Prix d’Elegance.

Final results were close across most of the classes and none more so than the Super Zero division that saw Dan Meyers’ Numbers win on tie-break when Niklas Zennstrom’s Ran was awarded redress after a starting-time error that tied both boats for the overall win.

Several classes held their week-long leads.  Although none were on board due to eligibility rules, the impact of professional sailors was credited with one victory.  “Having pros on the boat has sharpened up our game but without them this week we’re very happy with the win but must thank them for improving our performance, said Dave Dwyer, owner of marinerscove.ie the Class One winner.

The secret of Cork Week’s success cannot be attributed to any one rule or aspect of it’s organisation. It’s success is found in the eclectic mix of classes, competitors, good courses, good company, our team of dedicated volunteers and the good humour of our 10,000 visitors.
View all posts by admin →
Light airs for mid-way in Cork Week 2008
ACCBank Cork Week 2008 on CNN…