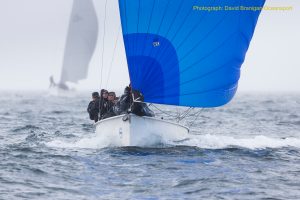 The wind gods smiled on the second day of Volvo Cork Week with a 15 knot southwesterly piping up, giving the international fleet a day to remember in the Celtic Sea. Barry Byrne’s Irish Defence Forces team came from behind to win the double points scoring Fastnet Race for the Beaufort Cup. During the 130 mile race, four teams swapped the lead in an intense battle around the Fastnet Lighthouse. Meanwhile 100 teams were competing inshore for the second day of Volvo Cork Week. A long coastal race, in good breeze along the wild South Coast of Ireland produced fantastic racing. 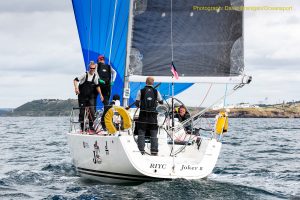 The Irish Defence Force team, racing J/109 Joker 2, skippered by Barry Byrne, opened their defence of the Beaufort Cup with a win in the 150 mile Fastnet Race. After digging in for trench warfare, with a beat all the way to the Fastnet Rock, Joker was fourth around the iconic lighthouse, and picked off the leaders to take the gun by just over four minutes from the Baltimore Lifeboat team skippered by Youen Jacob. The Baltimore Lifeboat team, with Olympian Peter O’Leary calling tactics staged their own comeback, sailing offshore into extra breeze to move up the ranks and threaten the leaders. Tánaiste Simon Coveney (Deputy Prime Minister of Ireland) racing J/109 Jedi, with an Irish Defence Force Team, led the fleet for much of the race, but lost out in the last few hours to come third. The Fastnet Race is a double scoring race for the Beaufort Cup, three days of inshore racing will decide the overall winner, who will also nominate a donation of 10000 Euros to the charity of their choice. 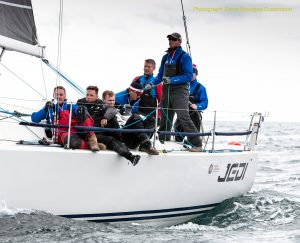 “Incredible.” commented Barry Byrne as Joker 2 crossed the finish line of the Fastnet Race for the Beaufort Cup. “The offshore race was a great battle, we were fourth at the Fastnet but I knew that we were still in it, and we were confident of our downwind speed. We know the job is not done yet. We have three more days of racing with no discard and the last race will be weighted 1.5. The level of competition is very high, probably the highest at Volvo Cork Week.” 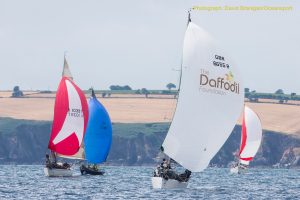 In IRC One Jonathan Anderson’s J/122 El Gran Senor (Clyde Cruising Club) was today’s winner. “I have been coming here for year’s, because it is always a good regatta.” commented Jonathan. “We were competing with the same team in Bangor a few weeks ago, and we have a great crew. We have managed to beat Conor Phelan’s Jump Juice in two races, which is a rarity, and there are plenty of well sailed boats in the class.”

In IRC Two, Ronan Harris’ J/109 Jigamaree (Royal Irish YC) corrected out to win by under a minute from yesterday’s winner, Dunlop & Cox’s J/109 Mojito (Pwllheli SC). “I am a Cork Week virgin.” admitted Ronan Harris. “I have a home in Baltimore and love to come and sail in West Cork. We are having a cracking battle with Mojito. We chose to duck them near the end of today’s race, and it worked out for us, plus the crew did a good job getting us through the light airs patch near the finish.” 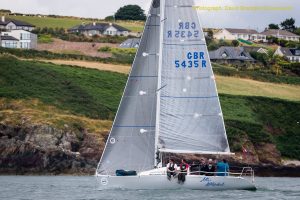 In IRC Three, Ronan & John Downing’s Half Tonner Miss Whiplash (Royal Cork YC) won Race 2, crossing the finish line just four seconds ahead of Wright, Cronnelly & DeNeve’s Corby 27 Kodachi (Howth YC). “The team did a good job today, especially on the beat where we can suffer against some of the boats in our class.” commented Ronan Downing. “I would say that the wind was up for most of the race, but there was one light patch where we positioned the boat well to get through.” Volvo Cork Week Chairman Kieran O’Connell is one of the crew on Miss Whiplash, Kieran was excused from boat wash down today, only on account of providing a case of Heineken for the team!

Volvo Cork Week continues tomorrow, Wednesday 18th July, with the scenic and tactically challenging Cork Harbour Race, and the start of the One Design Southern Championships for the 1720 Class and the International Dragons.