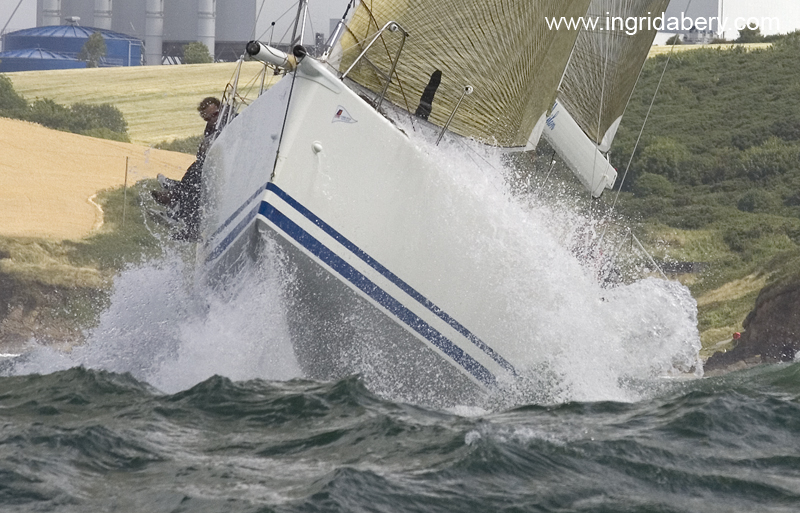 Well it doesn’t get better than this; gusting over 20 knots with wind over tide, kicking up the surf, the penultimate day of Cork Week was a day for some ballistic racing and a few dramatic moments.

Racing kicked off with a beat across the approach to Cork Harbour in the open sea to Ringabella Bay for the big boat class. There was drama right at the start, as Stephane Neve’s TP52 Paprec Recyclage came off a huge wave and down with a thump, blowing out their head sail. It took the French team minutes to recover, as the rest of the fleet blasted to windward. Austin Fragomen’s TP52 Interlodge rounded the top mark first with Johnny Vincent’s TP52, Pace in hot pursuit. They hoisted kites, exploding down the run at a good twenty knots, in a ball of spray.

The IRC Zero fleet then headed off into the confines of Cork Harbour and as if going in for half time, the harbour provided some refuge from the big breeze outside. Then it was back into the combat zone outside the harbour for some more on the edge surfing. The crew on Laidlaw and Gray’s Farr 52, Bob, could hardly contain themselves; fully hiked out downwind, they were spotted whooping with delight, as they turbo charged through the surf, like a guided missile.

Austin Fragomen’s TP52, Interlodge took the gun and the race win on big Thursday, Austin has wanted to do Cork Week for some time and helmed the boat in some truly awesome conditions. Not a bad effort for a man well past retirement age. 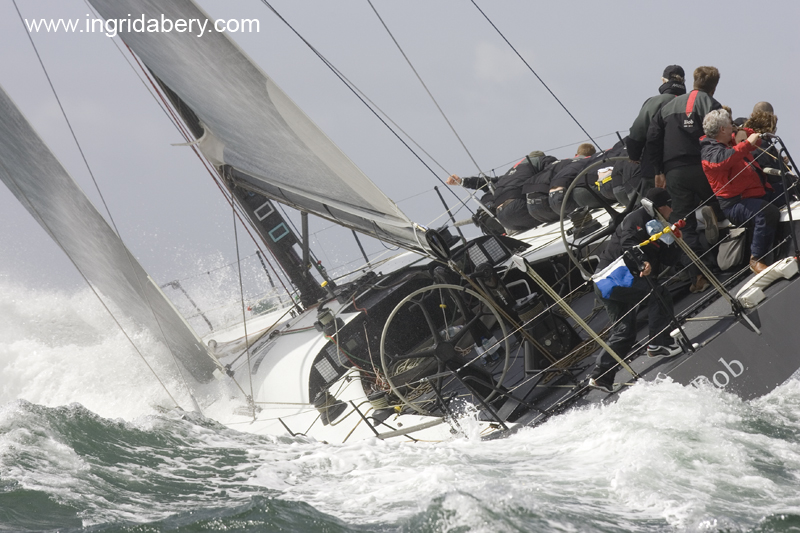 Irish Star Olympic sailor, Peter O’Leary has been sailing with Interlodge all week and had this to say after racing.  “The team have really enjoyed the week so far and today was just some of the best sailing that you can get. We had one big spin out, as a big puff came down off the headland, off Robert’s Cove. We had a couple of trips down the mine, as we surfed into the waves in front of us, sending green water all the way down the deck.”

There were thrills and spills in the J/109 fleet today. The asymmetric one designs were truly launched downwind today and title contender, Robert O’Leary’s Jeroboam, was flying when the pole failed to take the strain and buckled under load, forcing them to retire, pushing them down to third overall. John Maybury’s Joker II got into difficulties on the lea-shore behind Roches Point.  Bowman, Sean Paul White, bravely climbed the rig to free the tangled spinnaker but all on board were unhurt in the incident.

Today’s race was won by Ken Grant’s Scottish crew on Tigh Soluis, who get plenty of practice in these conditions. Brian Moreton’s Juke Box was only 22 seconds behind and remains in second place for the title. Greg Burgess’ Blue Jay did not fair as well today, coming 8th, but is still the overall leader for the J/109 European Championship.

“We have plenty of practice gybing in heavy weather and coming back downwind from Ringabella Bay, we put in a couple of great moves which was a key to our success.”

Dave Dwyer’s Mills 39, Marinerscove.ie was second in today’s race. Richard Matthews, Humphreys 42, Oystercatcher XXVI went around the course like a rocket ship to take line-honours but were third on corrected time. Going into the last day Nemo of Cowes leads the class but only by two points from Marinerscove.ie. So still all to play for in this very competitive class.

Robert Davies’ Corby 36, Roxy 6 had another great day, posting their third win on the trot but by a slender ten second margin, in an adrenalin pumping race lasting over three hours. With just one day to go, Roxy 6 is just a point ahead of Conor and Denise Phelan’s Ker 37, Jump Juice. Richard Fildes Corby 37, Impetuous is only four points adrift. These three boats are pretty evenly matched for speed, expect some fireworks tomorrow.

Rob Mc Connell’s X 35, Fools Gold reveled in the heavy going winning their first race at Cork Week 2010.  Sailing Logic’s Reflex 38, Visit Malta Puma were second but probably blew it right at the finish. Cutting it fine to lay the line, a big gust came down the track forcing them to spill out right in front of the finishing vessel. Paul O’Higgins Corby 33, Rockabill V had an early lead but eventually dropped back to third.

With one race to go, it could not be tighter with Rockabill V and Visit Malta Puma both on 12 points. Donal O’Leary’s X 35, D-Tox could only manage 13th today but are still in third overall.

John Moorehead & Chris Ferres J 35, Bengal Magic have a six point cushion at the top of the class, scoring their fourth series win today on a triangular course inside the harbour. Ross McDonald’s X 332, Equinox was second today and retains the runner up spot overall.

Dermot Cronin’s J 35, Mumbo retired today with minor boat damage and is under serious threat from Martin Breen’s Harley 33, That’s Life! who were third today and are now only half a point off a podium place.

Paul Kirwan’s Sigma 38, Errislannan was unstoppable in today’s heavy weather race. Powering home to take the gun and a fourth bullet in the regatta, by just over two minutes. Paul & Deirdre Tingle’s First 31.7, Alpaca could only manage fifth today but are still in second place overall. Conor Ronan’s Corby 26, Ruthless has closed the gap and are only two points behind Alpaca with one day to go.

Ian Byrne’s Sunfast 32, Sunburn had a disappointing day yesterday but the Howth Yacht Club boat had their best day at Cork Week today. Winning by over a minute on correct time from John Allen’s X 302 Antix. Ted Crosbie X 302 No Excuse was third. Vincent O’Shea’s Corby 25, YANKS $ FFRANCS could only manage ninth place today but still leads the class overall by a twelve point margin. Mathematically, YANKS $ FFRANCS can still be over-taken, but it seems very likely that IRC Three is in the bag.

O’Brien, Kenefick & Kenefick are home but probably not dry after a feisty day on the water. Racing Quarter Tonner, Tiger must have been like a wild ride on a bucking bronco. Tiger have a straight set of bullets from six races. Flor O’Driscoll’s J 24, Hard on Port was second, by under a minute on corrected time which almost assures Tiger of the class title. Jason Losty Custom 25, Woody was third today and is vying for third overall with Clem McElligott’s Sigma 33, Sea Hawk.

Malcolm Thorpe’s King Louie was today’s winner, scoring their first bullet of the regatta by a fair margin from Bryan Hassett’s Dark Side. Michael Wilson’s Yknot was third in the only race of the day but still holds the class lead by a three point margin, going into the last day of the regatta.

White Sail One and Two

A fair number of the White Sail fleet did not race today, Cork Week is a great place to race but also to watch and there is no doubt that many of the competitors in this non-spinnaker class were out witnessing some of the high performance boats honing around the race track.

Two races are scheduled for tomorrow, the last day for Cork Week 2010. There will be a few sore muscles, after the testing conditions today, but the race village is still buzzing with life. The most popular spot after racing is the bar at the Royal Cork Yacht Club. No doubt a few more stories were told there today, to add to the 290 year history

For full results and some awesome video from Digby Fox and his team, visit www.corkweek.ie 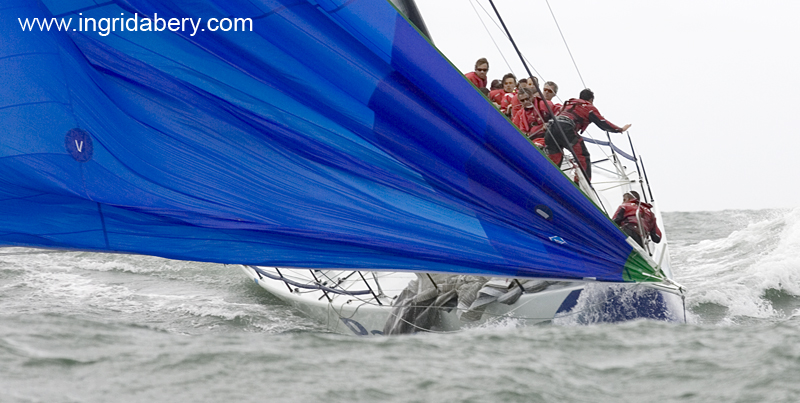 The secret of Cork Week’s success cannot be attributed to any one rule or aspect of it’s organisation. It’s success is found in the eclectic mix of classes, competitors, good courses, good company, our team of dedicated volunteers and the good humour of our 10,000 visitors.
View all posts by admin →
Rock and Roll!
The Final Chapter